Having faced the uncrowned reigning champions Rondebosch the week before, and ultimately faltering after making a good start to the match, Cape Town now came up against Durbanville, the former’s rivals for that unconfirmed League title – and the Plumstead-based outfit once more failed to last the distance after beginning well.  The Boon Wallace Oval pitch did the batsmen no more favours than it had the week before, and yet again the ball held almost total sway over the bat throughout the match – barring for about 1½ hours during the late morning / early afternoon, when the visitors’ pairing of Rubin Senekal and Bradley Petersen somehow managed to add 115 together at 4½ to the over, a standout achievement on the day that ultimately decided the result of the match.

Such an outcome was very difficult to contemplate some 90 minutes into the game though.  Having elected to bat first, Durbanville had their top order systematically winkled out, leaving them in disarray at 33-5.  Even more remarkably, it was home team new boy Lloyd Wingrove who was mainly responsible for inflicting the damage.  In only his third appearance for the Cape Town First XI, and having sent down just four overs previously for the side, the home side’s growing injury list meant that he was now entrusted with the new ball – and he made excellent use of it.  He needed just 16 deliveries to claim his maiden First XI scalp from a ball that climbed off a good length, and 40 minutes later he completed a brilliant first spell of 7-2-6-3.

Even at this zenith of achievement though, their ongoing ill luck relentlessly continued to plague Cape Town.  Just two overs previously they lost, as the latest casualty, the most senior of their remaining batsmen, William Hantam.  Badly damaging his hand in taking a low slip catch, he at a stroke was erased from all of Cape Town’s plans for the next few weeks.  But of a more immediate nature, the home side’s grip on proceedings had progressively begun to slip as they were unable to strike again over the course of the next 45 or so minutes.  True, they had still kept things commendably tight, such that with just 15 overs remaining, Durbanville had but 78 runs on the board.

But Senekal and Petersen had now acclimatised to the conditions, and being well settled at the crease, they were ready to counter-attack – and did so with telling effect.  Their fifty partnership was posted in the next over, and with Petersen surviving a caught and bowled attempt almost immediately thereafter, an additional 70 runs were added over the course of the next ten overs, the second half of their century stand needing just 41 balls to complete.  In the process Senekal reached his fifty with a six to accompany five previous fours, as the seam of Wingrove and Geoff Dods together conceded 41 runs in the course of five consecutive overs from one end.  Off-spinner Matthew Olsen took some tap himself at the other end too, but he also finally broke their stand in the 45th over as Senekal attempted one fancy shot too many.  Petersen remained a while longer to reach his own fifty, from a credible 68 balls faced, but once Olsen deceived him too, the end came quickly – the last three wickets all falling to him during the course of the 49th over.

While Durbanville’s final total of 177 wasn’t exactly awe-inspiring on paper, it represented a great recovery from their earlier travails.  More importantly, given the difficult batting conditions and with the home team now without their best batsman, it proved well beyond the reach of Cape Town’s inexperienced batting line-up.  So it was that they managed just three fours and 29 runs from the opening 13 overs – almost all of them from the bat of Olsen after he was promoted to open in the absence of Hantam – at the cost of two wickets.  Thus, once Olsen too fell as the first of two wickets to left-arm spinner Eddie Schutte in a tight opening spell, the home side could only slowly limp to 56-5 by the halfway mark of their innings.

That quickly became 57-6 as Petersen then joined the attack and made an immediate impact, and from there it was only just a matter of time until the visitors completed the win.  In the end it wasn’t that much time either, as Petersen and seamer Tashwin Lukas between them claimed the last three available Cape Town wickets within the space of twelve deliveries.  Thus Cape Town succumbed to a heavy defeat, bowled out for under a hundred by Durbanville for the third time in their last six matches. 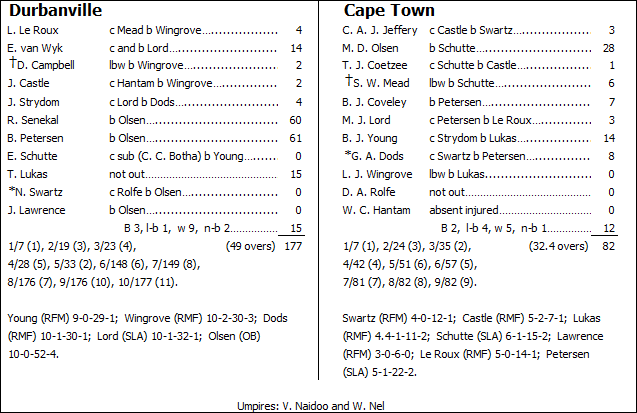