Having succumbed to the same team on home soil the day before in the 50-over competition, Cape Town’s struggles against Rondebosch continued unbroken the next day, when they travelled to the Terry Eksteen Oval in Rondebosch to do battle in the 20-over format this time.  Even a powerful batting display by the joint reigning format champions, led by a format-best contribution of 71 in just 41 balls from Clinton Botha, proved insufficient, and the visitors still slipped comfortably to their fourth straight defeat against Rondebosch – and the sixth in their last seven encounters.

Electing to bat first in lovely conditions, two fours crunched through the off side by Tristan Coetzee in the match’s opening over suggested from the outset that the home side would have a decent fight on their hands this time around.  However, English seamer Charles Jackson pushed past being struck for six and four in the space of three balls by Coetzee, to dismiss both Cape Town openers within six deliveries – and at 42-3 the visitors were in danger of wasting their positive start.

However, having struck his first six off just his sixth ball faced, Botha two balls later survived a chance to long off that the fielder also palmed over the rope – and from there he never looked back.  With namesake Dewald Botha providing good support from the other end with a run-a-ball innings of his own, Clint Botha charged to a 28-ball fifty – by seven deliveries the fastest of the ten in his Cape Town First XI career to date.  His knock included six sixes, including three struck off a single over from leg-spinner Dyllan Matthews, who had dominated their batting in vastly different conditions the day before.  The Botha pair thus raced to a fifty partnership from 41 deliveries, and at 110-3 with six overs remaining, the stage was set for a ferocious final onslaught by the visitors.

However, Rondebosch instead rallied to limit their guests to just seven singles from the next two overs, at the cost of two wickets, and the loss of a sixth wicket soon thereafter sent Cape Town into the final three overs of their innings with their momentum fading rather than climbing.  Still, Clint Botha remained to strike a further four and six off successive deliveries, and though Jackson returned to claim his wicket through a great running effort in the outfield by Ali-Akbar Shaik, ten runs off that final over nevertheless gave Cape Town a top-ten total amongst the 72 innings that the team has played since the T20 format was first introduced into Western Province club cricket in February 2006.

If an asking rate of eight to the over from the outset represented a daunting task to the home side, they showed no sign of it.  Brad Barnes (together with teammate Alistair Gray still the only batsman to have scored more than one century against Cape Town in the past 25 seasons) cracked three successive fours off the second over of the innings, before lofting two consecutive sixes off the over after that.  As a result, Rondebosch flew to 50-0 in barely five overs, with Barnes reaching his own fifty from just 22 balls (with two sixes and seven fours) shortly thereafter.  His partner at the other end, Jesse Christensen, by contrast went almost unnoticed, sedately compiling ten singles and a two from his first 16 deliveries, but once he started to find the boundary rope too, the home side were flying to victory on 102-0 at the halfway mark of their innings.

However, an injury-limited Cape Town attack somehow rallied through their back-up medium-pacers, breaking the opening stand immediately thereafter.  Then Lloyd Wingrove, who could scarce have asked for tougher circumstances in which to have his first bowl for the First XI, found a perfect rhythm to concede nothing but singles from his four allotted overs.  Thus, once Christensen holed out for 40 from 34 balls just when he seemed to be getting into his stride, and was followed by power-hitter Lennert van Wyk being run out an over later, suddenly Rondebosch had missed the chance to clinch a seemingly certain bonus point-win.  Worse, having not found the boundary at all in the last five overs, they now found themselves in a position of still needing a tricky 21 from the last three overs – and thus even facing the possibility of somehow losing the game.  It was quite inconceivable, given their complete dominance of the first half of their innings, and home team captain Grant Edmeades refused to even entertain the idea – lofting two consecutive sixes instead to finish the game with eight balls to spare. 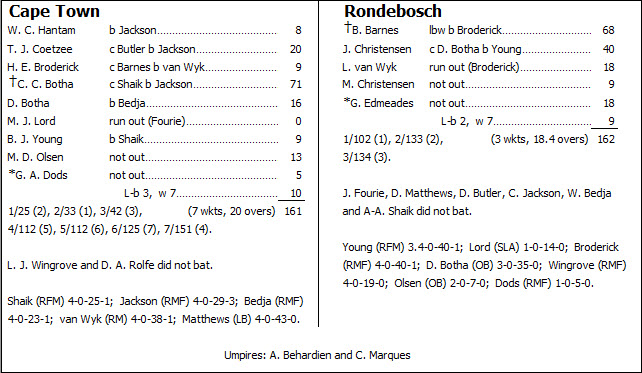