Following the early washout of their opening match against the University of the Western Cape the week before, the danger of the same thing happening again was present once more in the Cape Town First XI’s next match too – this time playing at home to Rondebosch, the unofficial reigning champions ever since the 2019/20 season was abandoned due to COVID-19 without a definite winner being declared.  Overnight rain, as well as a few showers on the morning of the match, left a wet patch on the table that ultimately delayed the start of proceeding by 1½ hours, reducing the match to 41 overs a side.  Barring a brief further shower at the start of the Cape Town innings (that had no effect on proceedings) however, the rain played no further part thereafter once play did get underway.

Its effect was definitely evident throughout the match though, as the Boon Wallace Oval pitch gave the batsmen on both sides a difficult time of it – the ball rearing up off a good length unpredictably and challenging the batsmen’s confidence to go through with their shots.  The home side were the initial beneficiaries of these conditions after inserting their guests, and seamer Nicholas Scott made full use of them in an opening spell of 6-2-6-2 that knocked over the visitors’ top order.  Cape Town skipper Geoff Dods contributed two scalps of his own from the other end with his canny medium-pacers too, and with just 13 overs remaining Rondebosch were consequently left struggling at 77-5.

However, the visitors’ new acquisition from Bellville, Lennert van Wyk, had by then dug himself in at the crease.  Having gotten off the mark with an on-driven six, he then contented himself with picking up ones and twos as he rode out the storm that overwhelmed his partners at the other end.  When joined by Luke Stevens at this juncture, van Wyk took his cue to go over onto the offensive, promptly striking three further sixes over the course of the first two full overs of their partnership, reaching a 54-ball fifty in the over after that.  Stevens for his part was mainly happy to keep turning over the strike to him, but added a maximum of his own along the way too.

The return of Scott to the attack finally broke their 57-run stand in the 38th over, and he added a fourth scalp too in his following over to finish with a highly impressive return of 8-2-9-4.  However, 16 taken from the final over left the momentum with Rondebosch somewhat, especially considering the difficult batting conditions and the heavy outfield – the visitors struck seven sixes in all, but just a single boundary four.

That suspicion was quickly confirmed when the home side lost their first wicket without a run on the board, and the subsequent batting in their turn found the going no easier than their counterparts had done earlier.  Batting mainstay William Hantam had to draw on all of his experience and did strike four fours, but his 46 dot balls faced also highlighted how heavy and slow the going was throughout.  Once he was finally deceived in the 20th over, one sensed that a corner had been turned, and two quick strikes by leg-spinner Dyllan Matthews then reduced Cape Town to 63-6 – still needing a daunting further 100 runs from the remaining 17 overs.

Their main hope of victory thus lay squarely on the shoulders of their own ex-Bellville recruit, Dewald Botha, who by then had struck two sixes of his own in working his way to 21.  While Dods held up his end grimly, Botha got on with the run-scoring responsibility – straight-driving his fourth four (to go with three sixes) to reach his 50 on Cape Town First XI debut from 73 balls faced.  The visitors remained well in control of proceedings though, and with 66 still needed from the last seven overs, seamer Thokozani Peters put the matter beyond any remaining doubt by breaking the stand as the first of two wickets in successive deliveries.

With the result now a lost cause, there remained a further cruel blow for the home side to endure as Scott then pulled up injured while batting and had to be helped from the field.  The only semi-bright spot in a disappointing day for Cape Town was that Botha’s fifth four denied Rondebosch a bonus-point win – just moments before a well-judged running catch off Wesley Bedja’s seamers then dismissed him to finish the game. 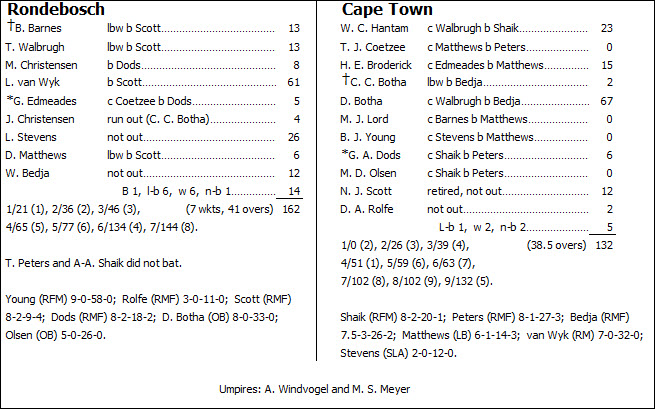