With the entire 2020/21 club cricket season having been scrapped due to the protocols imposed to combat the COVID-19 pandemic, the opening Saturday of the new 2021/22 season was an eagerly-awaited first return to action since mid-March 2020 for club cricketers in the Western Province.  It was to have been a busy start too, with the 50-over League kicking off on the Saturday, followed by the opening matches of the T20 competition the next day.  As events transpired, however, rain throughout the weekend produced a rather anti-climactic start instead, and almost every match in both competitions ultimately became weather-affected no results.

The Cape Town First XI travelled to the University of the Western Cape for their opening fixture, and visiting skipper Geoff Dods (leading the side for the 200th time since first taking over the reins in 2010) gained first advantage for his side by winning the toss.  As is always prudent, given that the local playing conditions for calculating revised targets in the event of delays and suspensions favour the side batting second, he chose to field first.  It brought immediate dividends too – opening bat Karl Vermeulen, having last appeared in a match involving Cape Town exactly 1 000 days previously, left his first ball – only to watch it clatter into his stumps as Brendan Young was on target with the new ball.  The visitors were prevented from exploiting this breakthrough though, as an arriving rain shower chased the players from the field just seconds later.

The resultant delay was less than 20 minutes, but when play resumed it was the students instead who gained control of proceedings.  Quintin Dreyer and Erinn Ewerts immediately employed an energetic batting strategy that combined quick, sharp singles with deft nudges and glances, and the home team were quickly back on track and moving forward at a good rate.  Indeed, Cape Town had yet to settle on an effective counter to this strategy by the time that the next shower arrived a half-hour later – this one ultimately proving to be fatal to the match’s further progress.

Several attempts were subsequently made to remove the covers when the light yet insistent rain did hold up every now and again, but somehow it always managed to time its return just when play seemed set to resume.  Eventually, after about an hour’s fruitless waiting and attempts to restart the game, the captains agreed to call it quits, with a view to needing the field for a T20 match the next day as well.  Thus the new season was not off to the brightest of starts, but at least it had started! 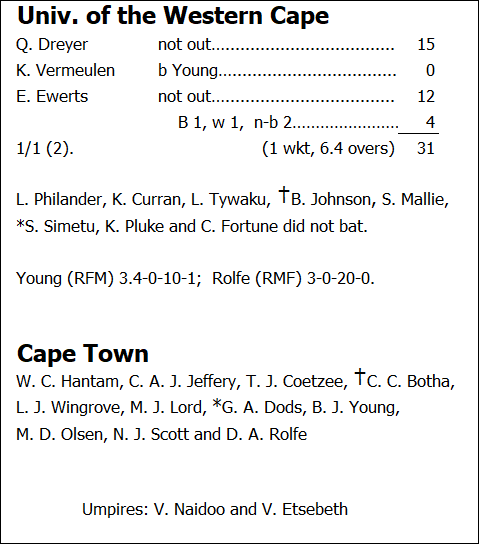