Claremont maintained their total domination of the quadrangular 50-over friendly competition, completing a full set of bonus point-margin wins over each of the other three participating clubs as they duly saw Cape Town off in turn with a 107-run trouncing at the Constantia Sports Centre. With Rondebosch defaulting on their remaining fixtures after their opening match, and Cape Town losing both of their two matches comfortably, the completion of the round robin phase should therefore have set up a Claremont vs Green Point Final for the following weekend, but it all seemed rather superfluous given Claremont’s dominance.

Such was the home team’s confidence that they elected to bat first upon winning the toss, despite heavy skies overhead and the constant threat of rain interruption. Opener Bryan Edwards personified that confidence, striking two fours off the opening over, and though Nicholas Scott struck an important if somewhat fortunate blow by having the dangerous Daniel Smith caught behind down the leg side off his first delivery, the regular flow of subsequent boundaries off Edwards’s bat made the loss scarcely noticeable to Claremont.

He had thus cruised to 33 from 34 balls by the time that off-spinner and captain of the day Matthew Olsen joined the attack soon after the completion of the initial ten-over PowerPlay, but it was the veteran Cape Town bowler who then seized the spotlight for a while. Beginning with a maiden followed immediately by a scalp in his next over, Olsen then also dispatched Edwards in the over after that – although not before the left-handed opening bat had struck him for six to eventually finish with 41 from 47 balls (including five fours and that six). Olsen went on to complete a credible opening spell of 5-1-21-2, and leg-spinner Dyllan Matthews also chipped in with a wicket in his first over soon thereafter.

That might indicate that the visitors were busy clawing their way back into the game, but in fact they were already chasing the game somewhat – Matthews’s strike having mainly served to squelch a promising fourth-wicket stand that had already added 35 at a rate better than a-run-a-ball. That was chiefly due to Greg Willows, who had taken over where Edwards had left off – striking a six and three fours in quick succession to race to 23 from his first 23 balls faced. As a result, Claremont’s overall run rate remained comfortably above four to the over almost continuously, and with solid support from the middle order in a succession of useful partnerships, he led the home team into the final 20 overs with six wickets in hand and plenty of momentum from which to launch.

Cape Town nevertheless hung in gamely, left-arm spinner Michal Lord also striking in his first over to prevent an all-out assault. However, Willows moved inexorably to a 53-ball fifty, and though the visitors were successful in keeping him relatively in check – all but one of his last 25 scoring strokes were singles – Claremont’s scoring rate edged ever higher. Thus, even when Matthews dismissed Willows in the first over of the final PowerPlay (having scored 60 from 71 balls with two sixes and four fours), and then Lord striking again in the over directly after that, the home team would not be contained. Harlan Greig now assumed the mantle of chief aggressor – and did it even more effectively than any of his predecessors to boot. His first few overs at the crease had already been punctuated by boundaries to maintain a run-a-ball personal tempo, but now two sixes and a four during the 46th over boosted him to a 51-ball fifty. Though he fell to Scott in the following over (for 55 off 55 balls, with three sixes and four fours), and Olsen also returned to bowl two excellent final overs at the death, Claremont’s final total of 238 was daunting – especially for a side with a batting line-up as inexperienced as Cape Town’s.

The visitors began their chase positively with a boundary off the first delivery, but soon found themselves in difficulty at 9-1 after the first three overs. That brought Lerato Kgoatle to the crease though, and he immediately proceeded to deliver more substantially on the promise that his brief yet bright cameo of the proceeding weekend had hinted at. Once more he executed a succession of ferociously-hit blows, three times striking two fours in an over as he charged to 31 from his first 17 balls faced. As such he completely dominated a second-wicket stand of 56 in 11½ overs, but unfortunately for Cape Town didn’t have nearly enough of the strike in that time to decisively influence events. Still, a four and a six off consecutive balls took Kgoatle to a 29-ball fifty – only to hole out two balls later trying one big shot too many.

That dismissal abruptly ended the fun and games for the visitors, and there would be no further boundaries scored until their last two wicket pairings managed one each. In between, the Cape Town middle order folded dramatically against Greig’s accurate legbreaks fired in fast and straight, well supported by Matthew De Villiers’s own more conventional legspin – after the medium pace of Matthew Elsworth had initially engineered the opening for Claremont. Thus the visitors collapsed to lose their last nine wickets in the space of 19 overs, sealing what was ultimately a very comprehensive win for the home side. 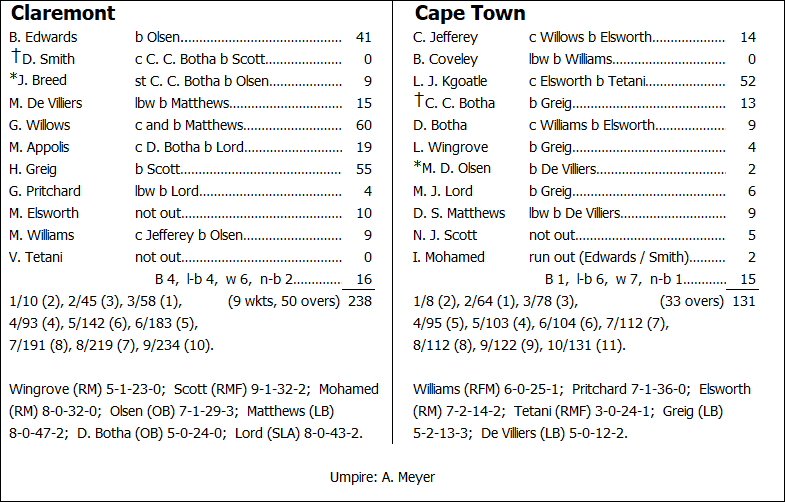