Since Cape Town’s last friendly against Western Province CC in late November 2020, their remaining three preseason friendlies planned for December 2020 and January 2021 had all been cancelled – as subsequently was the entire 2020/21 Western Province amateur cricket season itself, due to the ongoing Coronavirus pandemic.  As a result, this quadrangular limited overs friendly competition arranged privately with Claremont, Green Point and Rondebosch Cricket Clubs following the subsequent easing of the national lockdown restrictions, represented the Plumstead-based outfit’s first return to action since then – and a somewhat scratch outfit fielding less than half of its regular First XI representatives was duly found rather wanting against their newly-promoted Premier League hosts at the Stephan Oval in Green Point.

Matters had begun well enough for Cape Town after the home side had elected to take first use of a pitch that offered assistance to the new ball first-up, and when confusion between the two Green Point openers over a second run ended in an easy run out to boot, the visitors were sitting pretty with the scoreboard reflecting a total of just 8-1 from the first six overs.

However, Patrick van Niekerk began finding his touch after managing just one scoring stroke from his first 24 balls faced, and aided by a dropped catch then charged to his fifty off the next 24 balls – by which stage he had crunched two sixes and seven fours while tearing into the backup bowlers.  With Muneer Alexander providing solid if not quite as damaging support from the other end, the pair posted their fifty partnership at a-run-a-ball tempo, and had brought up the team hundred in the 20th over before Cape Town finally held a catch at their third attempt, to send back van Niekerk for a dominant 63 from just 64 balls, with three sixes and seven fours.  That noticeably helped the visitors slow down the scoring rate, but there were no further breakthroughs as Alexander continued on to reach his own fifty, having struck seven boundaries en route to the 73-ball milestone.  He then rather blotted his copybook though, holing out to the deep mid wicket boundary off his very next ball to give Cape Town’s newly-recruited franchise leg-spinner Dyllan Matthews his second scalp of the day.

The dismissal of both van Niekerk and Alexander did return a semblance of control to the visitors, as it took the home side from the 20th to the 35th over to advance the total from 100 to 150 while new batsmen Gerhard Jansen van Vuuren and Brendan Louw found their feet.  Indeed, the former would not last much longer either, falling victim to a direct hit as he took on the fielder for a tight single, but that only served to bring Louw and his captain Adam Scher together in what transpired to be an exhilarating stand for Green Point.  While the left-handed Louw was no slouch himself, scoring 33 from his last 23 balls faced to reach his own fifty in the penultimate over from 65 balls faced, it was Scher who provided the real impetus.  Taking a particular liking to the spinners, he lofted four sixes in five overs of spin faced, charging to 43* and regaining the strike with two balls left in the innings.  Now facing one of Cape Town’s most experienced seamers though, a hook over wide fine leg nevertheless brought Scher his fifth maximum – raising the home team’s 250 and suddenly bringing an unlikely-seeming half-century of his own within range.  Indeed, a scrambled single off the last ball was thus never going to be prevented, and the fourth personal half-century of the Green Point innings was ultimately the fastest of them all, Scher needing just 33 balls to get there with those five sixes and the four that initially got him off the mark.  It was an ending flourish of note, Louw and Scher having smashed 77 from the final eight overs.

With Cape Town playing only one of their regular top five, a victory target of 254 looked suspiciously beyond their reach – and so it quickly proved.  The visitors very briefly deceived observers into thinking that they might yet compete, by reaching 18-0 from the first four overs – but then their oft nemesis, opening bowler Josh Savage, dismissed both openers inside his first five overs.  Thus, by the end of the initial ten-over PowerPlay, the omens were already looking decidedly ominous – Cape Town having stuttered their way to 30-3.

There was a momentary glimmer of hope though, as Lerato Kgoatle, Cape Town’s new signing with First Class experience at Northerns and Limpopo,  counter-attacked to hit Savage out of the attack with three fours in an over – and five altogether in a crunching innings of 20 from 17 balls.  It was all too brief though, and Savage’s replacement, Kyle Karsten, dismissed him with his third delivery.  That initiated a frightful retreat: the visitors’ only specialist batsman with First XI experience was then run out next over in a horrible mix-up, which Karsten then followed-up by winning two lbw decisions in the over after that – before helping effect another run out off his own bowling in his next over. It was an appalling spectacle to witness, as in barely four overs Cape Town tumbled from an already doubtful 57-3 to a match-deciding 70-8.

There was still a last bit of resistance left though, as Lloyd Wingrove, who had witnessed the carnage at the other end from the non-striker’s end, took advantage of having nothing left to lose to crack a half-dozen fours over the course of the next six overs.  That propelled him to 39 from 42 balls, but it was never going to change anything – and Green Point duly wrapped up a comprehensive 136-run win soon thereafter, with fully half of Cape Town’s over allotment left unused. 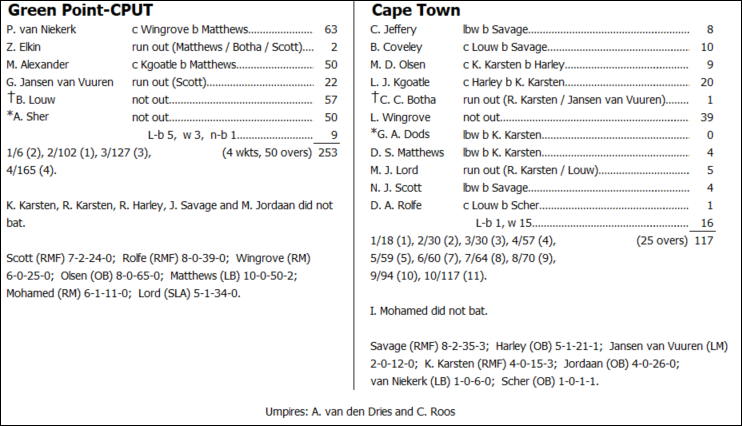