This turned out to be the final Saturday of club cricket for the Western Province Cricket Association’s 2019/20 season, as a few days later, for the second time in three seasons, all further play was cancelled – this time in deference to the looming crisis caused by the COVID-19 pandemic.  Cape Town at least ended their season on a happy note, an outstanding all-round performance by Matthew Olsen enabling them to trounce longstanding rivals Bellville by 133 runs at the Boon Wallace Oval.  With all of the Premier League’s top four sides recording bonus-point wins though in this round of matches, the result did nothing to change Cape Town’s third-place finish.  However, it did give the Plumstead-based outfit the satisfaction of recording a full set of home and away wins over their Northern Suburbs opponents for the second successive season, as well as giving the Cape Town First XI 20 victories in a season for the first time in the past 23 seasons.

Choosing to bat first, the home team’s opening pairing of James Crowson and William Hantam got the side off to another solid start.  Already the Cape Town First XI’s most productive opening partnership of the past 23 seasons – despite being their first season together – the match’s first over took the pair’s contribution to the 1 000-run mark.  It was Crowson who provided the bulk of their tally on this occasion though, striking six of the nine fours the pair took off the first eight overs.

A double-strike by Daniel Childs killed that momentum though, and when Crowson too followed not long thereafter, the home side were left to rebuild again from scratch at 56-3 after 14 overs.  That regrouping was slow in arriving though, as Dewald Botha’s off-breaks also bagged two scalps in an over to further reduce Cape Town to 82-5.  Indeed, the veteran spinner continued on to produce an immaculate bowling spell that worked its way steadily through the home team’s middle order, such that his Limited Overs career-best return against Cape Town of 4-21 by rights should have left the innings wrecked beyond repair at 124-7.

However, home side skipper Geoff Dods had been enjoying a batting renaissance since the start of the month, although this unfortunately had not been correspondingly reflected in his team’s fortunes.  Nevertheless, he again secured one end while he awaited support from the other, and now finally found it in the form of Olsen.  Up until then Cape Town had relied primarily on Dods’s bat to keep them going forward, but Olsen quickly proved himself an equal partner as the pair proceeded to turn matters around by adding 55 together in eight overs.  It was an atypical knock from Olsen, containing just one boundary from his first 25 balls faced, while Dods provided the muscle with five fours and a six.  Five overs from the end, however, and the ball after he had worked a single off his pads to become just the eighth Cape Town First XI player in the past 23 seasons to reach 3 000 career runs for the side, he miscued badly to cover.  That was the invitation to Olsen to provide the big finish though, and he duly obliged – contributing 20 of the 28 runs added inside three overs for the last wicket, and in the process reaching his fourth career half-century for the side from just 43 balls faced (five fours).

Having let the game slip by conceding 40 from the last five overs, Bellville had left themselves a stern run chase to negotiate.  While captain Uwe Birkenstock initially seemed up for the task in striking four quick boundaries at the top of the order, he was also the middle victim of an opening salvo of three batsmen castled in his first five overs by Brendan Young – putting the home team even further in command.  Kyle de Wet held out for a further eleven overs without really getting going, and when he did finally seem to be stepping up his scoring rate by striking two consecutive boundaries, he then made the fatal error of playing back in his crease to spin at Plumstead the very next over.

By then though, Olsen had already claimed the match as his own with two wickets in his opening over, reducing the visitors to 62-5.  Then, following his dismissal of De Wet, he swept through the lower middle order with alacrity – completing his second five-for of the season against Bellville halfway through his fifth over.  There was nothing left for Bellville by then, and Nicholas Scott duly wrapped up the tail to conclude the unequal contest just 22 overs into the visitors’ innings.

For Olsen it was a personal triumph of rare magnitude – he became the first player in any of Cape Town’s 144 Limited Over matches contested over the past 23 seasons to score both a fifty and take five wickets in the same match.  It was a fitting accolade to add to the 262-cap veteran’s dossier of achievements, and while his record appearance tally may yet be surpassed by his captain (who holds his own incontestable record by having now led the Cape Town First XI 199 times, since taking over the reigns at the start of the 2010/11 season), Olsen’s 586 First XI career wickets are unlikely ever to be rivalled in the club’s future history. 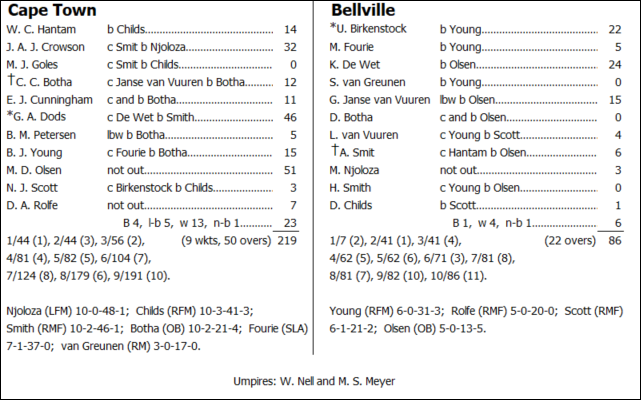