After the disappointment of losing their must-win showdown against Rondebosch the week before, and thereby relinquishing any realistic hope of still winning the league, Cape Town’s star remained in decline as they now ended up on the wrong side of a tight finish against the University of Cape Town at Groote Schuur.  With Rondebosch simultaneously continuing on their merry way by completing another crushing win – lengthening their lead at the top of the standings to nine points with only two rounds remaining, plus having a game in hand – that particular argument seemed well and truly settled to all intents and purposes.  However, worse news for the Plumstead-based was that Durbanville had also sneaked home in an equally close game, thereby snatching second spot on the Premier League points table away from Cape Town via the tie-breaking rules for two sides level on points.  Coupled with the University of the Western Cape also having closed up to just one point behind them in fourth place by the end of the weekend, it had been a disastrous start to the season’s final month for Cape Town.

It had been UCT’s last-wicket pair that, in their hard-fought first-round match, had denied Cape Town the bonus point that now kept them out of second place.  Now that last-wicket pair was once again the visitors’ undoing, as on this occasion they went one better to secure a win for the students that a half-hour before had seemed to have slipped from the home team’s grasp.  It was hard to begrudge UCT their victory though, as they had dominated the vast majority of the game, and their win – achieved within bonus point parameters with just two balls to spare – was an outcome that they badly needed in their desperate bid to escape relegation in the season’s closing weeks.

Cape Town had elected to bat first upon winning the toss, but by the time that the first drinks break was taken just 70 minutes into the game, they were already teetering on the edge of a precipice at 22-5.  Opening bowler Josh Manley had inflicted the initial damage with a new-ball spell of 6-1-10-3, a start that his replacement, left-arm wrist spinner Craig Meier, then built on perfectly by beginning with two maiden wicket overs.  It was an open question as to how much of that sad state of affairs followed from a generally deflated Cape Town disposition fuelled by the knowledge that their title hopes were now gone, but regardless, it was not a position that offered much promise.

As ever, visiting skipper Geoff Dods was up for the challenge though, picking up where he had left off the week before to fight another rearguard action with the lower middle-order.  This time he found support from Bradley Petersen, the pair adding 63 together in 13 overs for the seventh wicket to at least ensure that a three-digit total would be posted.  Once the other opening home team bowler, Matthew Benning, finally broke that stand though, the end came quickly – Meier claiming the final two wickets (including Petersen for a punchy 39 from 44 balls, with seven fours) in consecutive overs to complete his five-for and set UCT a target of just 121 for victory.

When Cape Town took the field for a seven-over burst in the time remaining before lunch, Brendan Young struck early to offer some hope of a contest.  However, following up on his earlier four victims behind the stumps, an aggressive knock of 26 from 24 balls by home team captain Taariq Chiecktey instead seized the initiative by taking the fight to the bowlers.  As a result, even when Petersen finally spun one passed his bat the ball after being hit for six, he had left the students sitting pretty at 42-2 after the initial ten-over PowerPlay.

Almost inevitably though, there were plot twists to follow.  Matthew Dicks, who had assisted Chiecktey in getting the home team’s innings back on track, was then persuaded to hook straight to deep square leg soon after, and with Petersen and Darren Rolfe then getting stuck into an unsettled middle order, UCT were tipped into a downward spiral that cost them six for 30 in the space of 15 overs.  It was a spectacular fightback by the visitors, and in the process Petersen claimed his 100th scalp for the Cape Town First XI, in his 57th appearance for them.

Suddenly at 72-7 the match was wide open again, with just Josh Coetzee remaining amongst the batsmen as an obstacle to Cape Town’s now beckoning win.  With run rate never an issue though, Coetzee could afford to take his time establishing himself at the crease, and his first 37 balls faced produced just eleven scoring strokes.  His continued presence became increasingly problematic for the visitors though, as he edged the home side closer and closer – until it finally took a heroic final spell from Rolfe to pry him out for a dogged 30 in an hour-and-a-half’s resistance (three fours) and thus bring the students’ final two batsmen together.

That seemed to have settled matters in Cape Town’s favour at last, as a not-insubstantial 21 runs were still needed.  However, with Petersen and both premier strike bowlers Young and Rolfe now bowled out, Cape Town discovered that they lacked the means to land the final blow.  Instead, it was Matthew Rudston who would produce the decisive individual contribution that settled matters, lofting two sixes and a four to sneak UCT home – and grab the five match points that enabled them to leapfrog Strandfontein to escape the guaranteed relegation-bound eleventh spot on the log. 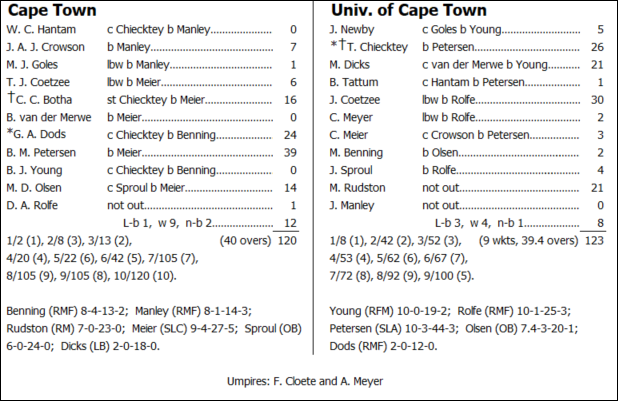