With both Cape Town and Rondebosch enjoying a long run of wins coming into the match, moving them methodically up the Premier League log to first and second place respectively, this set up probably the most tantalising match of the 2019/20 Premier League season – the direct head-to-head clash between the two to decide in all probability who would go on to win the title.  Although Cape Town enjoyed home ground advantage for the game, it was Rondebosch who were the better placed – besides having won the first-round encounter between the two sides handsomely to give them the edge should both sides finish level on points, they even more importantly also had a game in hand over their rivals.  Those two strikes against them effectively compelled Cape Town to win the match with a bonus point in order to keep their hopes of staying ahead realistically alive, and in the end the pressure proved too great.  A juggernaut Rondebosch batting effort led by Brad Barnes’s second career hundred against the Plumstead-based outfit set the bonus point parameter at an all-but-impossible 6.45 runs an over from the outset against an equally strong bowling line-up, and Cape Town crumbled badly without ever mounting a challenge.  The result lifted the visitors four points clear into the lead with that game in hand still up their sleeves, and with Durbanville back on track and closing up again from third place, the dream had all but died for Cape Town.

Matters had begun promisingly enough for the home side though, when in the very first over after Rondebosch had elected to bat first, Brendan Young fired one through Tayo Walbrugh to become only the second Cape Town bowler (after Darren Rolfe) in the last 23 seasons to castle 100 opposition batsmen.  That was about as good as it would get for Cape Town though, as Barnes found a solid partner in his coach Sean Hendrieck to begin increasingly assuming control.  With Barnes keeping the scoreboard ticking over merrily from the start with a regular accumulation of boundaries, and Hendrieck – while rather less fluent – proving unmoveable at the other end, the team 50 was still posted at a good rate by the twelfth over, with the 50 partnership following quickly thereafter.  By then Barnes had seen enough and was ready to up the ante, slog-sweeping four sixes off left-arm spinner Brad Petersen’s first three overs to reach a 46-ball fifty.  His shot placement was superb too, having deep mid wicket scurrying both to his left and his right as the ball frustratingly sailed passed just out of reach each time – although he might have laid fingertips on at least one of them.

Petersen did persevere through the onslaught to claim Hendrieck’s scalp in the same over that the hundred-run stand was raised, but that provided no respite for Cape Town as the visiting skipper Grant Edmeades merely continued where Hendrieck had left off – for the first 25 minutes or so anyway.  At that point he then happily joined the party, striking three fours in the space of four deliveries to doom the home side to conceding a steady stream of runs from both ends simultaneously.  The fifty partnership was duly raised after twelve overs together, by which point Barnes had long since been scoring at will.  On 99* as the final PowerPlay began, a solid cut next ball down to the cover sweeper raised a 108-ball century that included those four earlier sixes as well as nine fours, and in the next over Edmeades went to his own fifty with his seventh boundary.  A second consecutive century partnership followed in the over after that – the first time in the 142 Limited Overs matches that the Cape Town First XI had contested up to that point since the start of the 1997/98 season, that any batting side had managed two hundred partnerships in the same innings.  With eight wickets still in hand and two very well-set batsmen at the crease, it was more than the home side’s attack could cope with, and 50 runs were plundered from the last six overs as a result.  Edmeades did finally fall in the process for a 102-ball 70, but Barnes continued imperiously to the end to finish with 133 from just 135 balls, with five sixes and eleven fours.

Left with a mountain the size of Everest to climb, a dropped slip catch and three quick boundaries gave just a brief glimmer of hope as 15 came from the first two overs, but the Rondebosch opening bowlers quickly adjusted to reassert control.  Thereafter James Crowson hit two further boundaries and Mathew Goles – in his 100th Cape Town First XI appearance – pulled his second ball faced for six, but the destroyer-in-chief in their first-round match, Irish seamer David O’Halloron, struck three times in his first four overs, while left-arm spinner Luke Stevens reeled off an opening spell of 6-3-8-2 simultaneously from the other end.  The net result was that Cape Town collapsed to 60-6 barely 20 overs into their reply, emphatically removing any tiny remaining doubts that any optimist may still have held about the match’s outcome.

From there it was just a matter of allowing things to run their course.  Home team skipper Geoff Dods offered some resistance for a while, and Matthew Olsen landed a few defiant blows at the death, but with veteran leg-spinner Alistair Gray also getting involved with both ball and as a slip catcher, the inevitable end arrived with eight overs to spare – Rondebosch cruising to their biggest-ever win by a margin of runs over Cape Town.  It was a fitting demonstration of Rondebosch’s worthiness to take over as the Premier League’s leading side as the season entered its final month, and with momentum on their side and that game still in hand over their closest rivals, few would have disputed Rondebosch’s ability to further extend that lead and claim the silverware for the first time in the club’s short 13-season history. 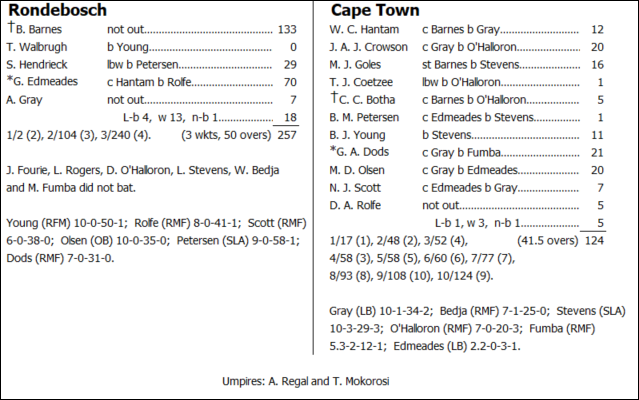