Under constant pressure from a Rondebosch side on a roll and breathing heavily down their necks, Cape Town maintained their slender one-point lead at the top of the Premier League with another thumping win of their own – demolishing Brackenfell on the latter’s own home ground in cruising to a second ten-wicket win in less than a month.  With defending champions Durbanville slipping up against mid-table Bellville at the same time to slip eight points off the running, everything had consequently been set up perfectly for the vital first vs second clash the next day, to determine whether Cape Town would stay top or concede the lead to Rondebosch.

Choosing to field first at the Brackenfell Sports Complex, Cape Town had an inauspicious start with three wides in the opening over, and with left-handed opener Michael Loubser then striking three fours in quick succession, the home side had made the better start at 25-0 after six overs.  However, a diving catch by wicket-keeper Clint Botha (earning him his 350th career dismissal for the Cape Town First XI), and helped engineer the breakthrough, and thereafter the visitors began pulling things back nicely.  Two strikes within his first three overs by off-spinner Matthew Olsen included removing Loubser, and in barely 50 minutes Brackenfell suddenly found themselves with their top four all back in the hut and not yet 50 runs on the board.

Notwithstanding a brief counter-attack by Christiaan Mocke in hitting a six and two fours in an over off Olsen, matters didn’t improve from there for the home side either, as Olsen stuck to his guns to bag a third wicket while conceding just 30 from his ten overs.  It was the introduction of Brad Petersen’s left-arm spin that was decisive though, as he too struck in his first and third overs – before a double-strike in his fourth accounted for Mocke to end the last Brackenfell resistance.  Well-supported by William Hantam at slip, figures of 4-13 in five overs meant that Petersen had repeated his best return in the 50-over format for the Cape Town First XI for a second successive match, in both of which the opposition had been bundled out for less than 100.

With the home team’s innings having lasted less than 2½ hours, Cape Town began their chase before the lunch break scheduled for between the innings, and the visitors were determined to finish the match before then.  In the first over Hantam and James Crowson added the two runs that they needed to pass the 879 runs that Andrew Saunders and Scott Stedall had compiled during 2001 – 2003, to become the Cape Town First XI’s most prolific opening partnership of the past 23 seasons (and that in their first season together).  It was their fifth fifty partnership of the season, besides another three century stands, and their success as a partnership was obviously one of the main contributors to the Cape Town First XI’s success in 2019/20.

That particular milestone went unnoticed at the time though, particularly once the fireworks began soon after – overs four to six alone surrendered 37 runs to the Cape Town cause, as the pair crashed a six and seven fours in that time between them.  Already handicapped by a minimal target to defend, the home team had no answers, and an eighth boundary posted the fifty partnership off just 47 balls.  Generally one or the other has played the dominant role in the Hantam / Crowson stands to date, but on this occasion they matched each other blow for blow.  Three fours in an over put Hantam ahead though, enabling him to reach a 46-ball fifty (his third half-century in four innings) in the over before he lofted his ninth four comfortably over mid on to bring an end to proceedings barely 50 minutes after the visitors had started their innings.  Hantam’s 54 had needed just 48 balls, and included a six and those nine fours, while Crowson had contributed 43 from 44 balls with seven fours.  All told, it was as comprehensive a performance from Cape Town as anyone could ever hope to see. 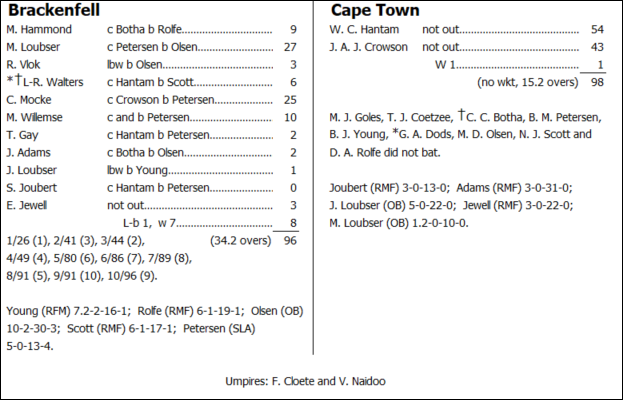