Having taken over the position on 8 February, the Cape Town First XI retained their top spot on the Premier League points table with a thumping win over League newcomers Strandfontein at the Boon Wallace Oval.  It was the home side’s sixth consecutive win, and while not a record in itself (from early November 2003 until late February 2005, the First XI had enjoyed a run of ten consecutive Limited Overs victories), it would have been had they not tossed victory away in their tied match against Durbanville in January).  Still, since their run began against Victoria in mid-December last year, this win has now taken Cape Town to eleven consecutive matches without defeat, which is a new 23-season record for the side – finally eclipsing two separate ten-match sequences of unbeaten results: first between March 2007 and January 2008, and then again lasting from February to November 2015).  The net result left everything nicely set up for the clash against direct title challengers Rondebosch on the weekend ahead, the result of which would effectively determine who would ultimately be crowned the 2019/20 Western Province Premier League champions.

Having won the toss on a cool and cloudy day with some moisture still in the air following early-morning rain, Strandfontein surprised by electing to bat first – and promptly paid heavily for the error.  With the home side’s new-ball pairing of Brendan Young and Darren Rolfe finding significant movement in the atmospheric conditions, allied to a pitch displaying unpredictable variation in both pace and bounce, the Premier League newcomers’ top order were confronted with a challenge that proved insurmountable to them – and in barely ten minutes the visitors were reduced to seven for three.  Matters did not improve much from there onwards either – by the end of the initial ten-over Powerplay they had inched their way to just 16, promptly lost a fourth wicket almost immediately thereafter, and by the end of the first hour’s play Young and Rolfe had left the Strandfontein ship fatally holed at 26-5.

It was only their number three bat, Justin Gilliland who thereafter dug in determinedly to prevent total disintegration.  He produced just ten scoring strokes (eight of them singles) from his first 20 overs at the crease, but his continued presence allowed the lower middle order to crystallise a measure of resistance that extended the innings out to 74-6 after 30 overs.  However, by then left-arm spinner Bradley Petersen had found his range, and once he induced Gilliland to charge passed a dipping delivery that ended his 69-ball vigil, having struck a six and three fours, the tail had little else to offer.  In fact, Petersen needed just 14 further deliveries to bag the remaining three wickets as well, bundling Strandfontein out for 86 an hour before the scheduled lunch break, and completing his personal best Limited Overs bowling performance of his Cape Town First XI career to date.

Besides setting themselves an easy victory target, another benefit to Cape Town of their rapid demolition of the visitors’ batting was that there was enough time on hand to begin their run chase immediately, without taking lunch first – an important consideration with the weather beginning to close in again.  Openers William Hantam (in his 50th Limited Overs match for the Cape Town First XI) and James Crowson continued their highly effective first-wicket partnership established this season, needing just 9½ overs to post their seventh 50-plus stand to date.  With Hantam cracking six fours in his 40 ball-knock, within 45 minutes the pair had motored to just 15 short of victory, before Hantam finally fell playing one shot too many.  The Hantam / Crowson partnership aggregate now stands at 878 runs to date (a tally containing three century stands, including a best of 177 – Cape Town’s highest first-wicket stand in at least their last 23 seasons).  Interestingly, the dismissal left the pair just one run short of equalling becoming the First XI’s most productive opening stand since 1997: the record currently being the 879 runs accumulated by Andrew Saunders and Scott Stedall between 2001 and 2003 – although Hantam and Crowson have had nine fewer innings together.

Stats notwithstanding though, the game still required completing, and Crowson all but did so almost immediately afterwards, striking three consecutive fours to fly passed a 41-ball fifty and end on an undefeated 55 from just 44 balls, with two sixes and nine fours.  Not 30 minutes later the rain began to fall, but the home side had already safely bagged the bonus-point win that kept them top of the log, maintaining their nose-length lead by cancelling out Rondebosch’s almost identical simultaneous annihilation of Langa. 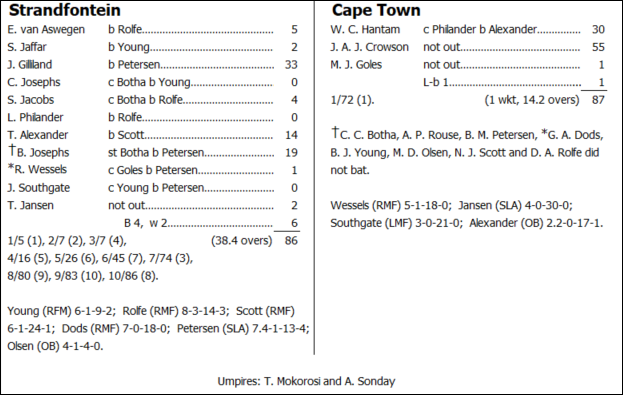