The fight for the 2019/20 Premier League title continued apace, as the top three of Cape Town, Rondebosch and Durbanville all achieved bonus-point wins in this round of matches to further distance themselves from the chasing pack – and maintaining the slender two-point difference separating the three of them.  For Cape Town, their 113-run win was their second-biggest over the University of the Western Cape in terms of runs since the two sides met for the very first time back in February 2002, and was vital for retaining their newly-gained top spot on the log.

After losing the toss and being sent in to bat for the third consecutive match, such a victory was not immediately evident when they lost a relatively early wicket as part of a probing initial spell with the new ball by opening bowler Kyle Pluke.  However, Cape Town’s initial leading run scorer for the season, Mathew Goles, chose this game to temporarily shrug off what was otherwise a poor second half of the season for him, settling in with William Hantam (who was just beginning a solid run of form) to first stabilise the home team’s innings, and then begin building a platform from which to launch an assault in the closing overs.  Their stand was initially heavy going against tight bowling though, with their first 17 overs together netting just 37 runs.  Having successfully fought through that period though, fortune at last began to swing in the home team’s favour.  First a cover-driven four took Goles to 2 500 career runs in his 97th match for the Cape Town First XI.  Then, some 20 minutes later, a six and a four from Hantam in the same over signalled his own change of approach – and by the end of the third over thereafter six fours (five by Hantam) and that six had consequently accrued to the Cape Town total, raising the fifty-run stand between Hantam and Goles in the process.

Two overs later Hantam reached his second consecutive fifty – this one a rather more labour-intensive effort that required 96 balls to complete (but still including one six and nine fours), but he then blotted his copybook somewhat by lofting straight to deep square leg in the same over.  Once again Clinton Botha was on hand to halt any further rot though, providing the acceleration boost to neatly complement Goles’s steady accumulation at the other end.  The last 53 runs of their stand thus took just 48 balls to compile, as Botha cracked a six and four fours from his 50 balls, and even once he fell Adam Rouse kept on building the momentum with a cameo 21 struck off his first ten balls faced.  Inbetween Goles reached a 96-ball fifty of his own, before eventually falling in the 48th over for a solid 68 from 105, with eleven fours.  It all represented an excellently executed piece of acceleration by the Cape Town batting, the last ten overs producing 83 runs to set the students a challenging victory target of 215.

In fact, UWC had successfully chased down a similar target on home soil in the first round without too much drama, but this time around they never came close.  To be honest though, they looked well in the picture to begin with – as some loose initial bowling with the new ball allowed the students to plunder 46 from the opening ten-over PowerPlay, despite the loss of an early wicket.  Quintin Dreyer was almost solely responsible for that though, cracking six fours as he raced to 35 from 32 balls, such that once he fell to Nicholas Scott almost immediately after joining the attack at that juncture, all further UWC momentum departed right along with him.

Indeed, Scott was magnificent in producing as dominant a spell as a seamer has ever managed at the Boon Wallace Oval in recent times, conceding just four singles from his opening nine overs while simultaneously whittling away the UWC middle order.  With the students thus shut completely out of the game, it then fell to home team skipper Geoff Dods to provide the finishing touches, wrapping up the tail in short order to bundle UWC out for a scant 101 – only a three taken just before the final wicket fell allowing them to just avoid their lowest ever total against Cape Town (100 in the corresponding fixture last season).  In the process James Crowson held his 19th catch of the season in the field, surpassing Matthew Olsen’s 2008/09 tally of 18 to claim that particular Cape Town First XI record of the past 23 seasons for himself.  All in all it was a highly impressive performance in the field by the home side as a whole though, and one well worthy of a team in their current position at the top of the points standings. 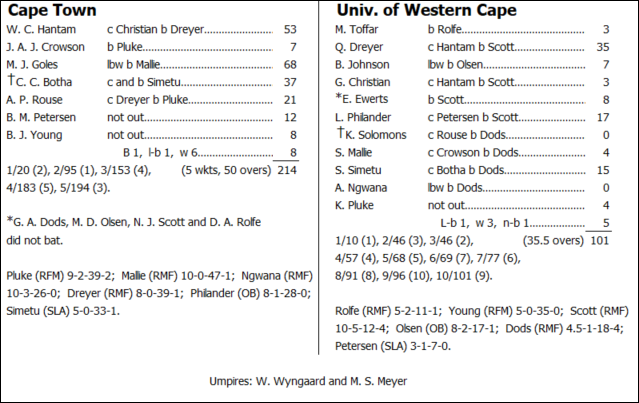