Discounting the T20 match against Rondebosch on the season’s opening weekend – which also ended with level scores but was subsequently played out to a further conclusion in terms of that competition’s Super Over provision – this was the Cape Town First XI’s first tied match since late March 1997, a full 411 competitive matches previously. That it was achieved against reigning champions Durbanville – at the time again leading the Premier League points standings – was commendable, and all the more so for the way in which it signalled a vast improvement in Cape Town’s competitiveness since being totally annihilated by the same opponents in the opening round of Limited Overs fixtures back in October.  However, that would also be window-dressing that disguises what a huge missed opportunity this was for the home side in a match that had seemed theirs for the taking, and broke what would otherwise have ultimately been an unprecedented run of twelve consecutive victories for the First XI.  Indeed, the three points thus gifted to the visitors not only enabled them to retain top spot on the log for a few weeks longer, but ultimately also resulted in Durbanville taking a second-place finish in the Premier League away from Cape Town at the season’s end.

The home side had done well to bowl their guests out for just 172 earlier, but when they were then reduced to 53 for five themselves just 16 overs into their reply, they had seemingly wasted their good work in the field.  However, their Kent professional Adam Rouse still remained to begin Cape Town’s fightback from there, totally dominating a 36-run stand for the sixth wicket that included being given a life on 15* when driving uppishly to mid on.  Still, at 89-6 at the halfway stage, matters were not looking great for the home side – until Rouse finally received the support he needed from his skipper Geoff Dods.  With the latter content to work the singles and rotate the strike, Rouse put the reverse-sweep in particular to good effect against the visiting spinners, reaching his second fifty of the season with a remarkable six struck in just that fashion.  Their eventual stand of 57 in 16 overs not only brought the home side right back into the match, but with just 32 needed from the final ten overs with four wickets in hand and those two going well, had actually made Cape Town the favourites.

However, matters were never going to be quite that simple.  Durbanville captain Nathan Swartz, who bowled impeccably throughout, then returned to break the stand almost immediately, before also critically removing Rouse (for a Cape Town career-best 75 from 98 balls, with one six and nine fours) in his final over to complete an immaculate performance of 4-18 from his ten overs.  That threw everything back into the melting pot as the tension built, but a cut through backward point for four in the next over by Brendan Young – celebrating what would be a very memorable 150th Cape Town First XI appearance – seemed to have sealed it for his side by reducing the equation to just seven needed from the last three overs.  That remained the case even when the expensive off-spin of JT Schoeman then suddenly produced a wicket maiden over next up, thereby reducing Cape Town to their last batting pair.  Still trading punches, a crunching cover-drive for four by number eleven Darren Rolfe then all but completed the job, levelling the scores as the game entered its final over.  One run off six balls may seldom seem challenging, even with nine wickets down, but pressure does funny things – and for all his experience, Young decided on the aerial route.  Inevitably, he unerringly picked out the deep mid wicket fielder, who came in off the rope to hold a good catch low to the ground – finishing matters amid scenes of jubilation and disbelief in equal measure.

Earlier, a Cape Town side that had been reinforced by the sole appearance for the season of newly-selected Proteas international Kyle Verreynne, together with Cape Cobras franchise teammate David Bedingham, had given little indication that their batting was up to the task of chasing down the 173 runs needed for victory.  William Hantam had supplied a more cautious than usual knock of 20 at the top of the order, but with Swartz making early inroads and both headline players falling cheaply to Leon le Roux’s medium-pacers, a launching platform of 58-5 after 19 overs by the first drinks break offered no hint of the tight contest that was to follow.

The visitors had been asked to bat first on what was initially a cool and overcast day, but nevertheless began solidly enough by taking 31 without loss from the opening ten-over PowerPlay.  Though Cape Town persevered to grab two wickets quickly immediately afterwards, further progress was held up by Durbanville’s own franchise player (and soon-to-be Protea) Janneman Malan, who combined with Jean Marais to steer the Northern suburb side to the halfway mark of their innings without further loss.  After an abortive experiment with taking the new ball initially, however, left-arm spinner Bradley Petersen returned with an excellent second spell of 2-19 in eight overs that in the process also dismissed them both in quick succession.  It was a spell that allowed the home side to regroup, and as a result they were still strongly in the contest at 101-5 with just 15 overs remaining in the visitors’ innings.

It thus came down to who finished better, which at first appeared to be Durbanville as Jean Strydom and Carlos Koyana (missed on 18* by one of Cape Town’s most reliable catchers) added 42 in six overs for the sixth wicket.  Once they were parted though, it was Matthew Olsen who did the better finishing job, claiming a wicket in each of his final two overs with his off breaks and opening the way for Cape Town’s premier seamers, Young and Rolfe, to close off the innings with an over left unused.  It thus seemed as if Cape Town had held their guests to a somewhat middling total, but as events were to ultimately prove, it was one that was just enough. 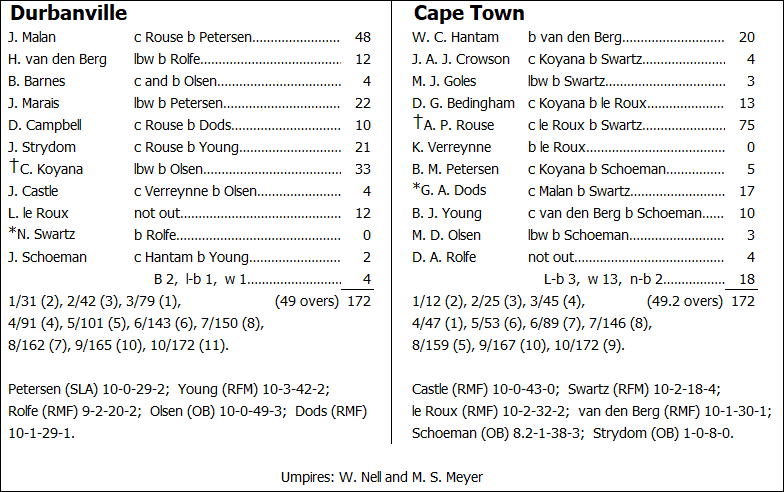