The Cape Town First XI continued their resurgence started late last year, reeling off a third consecutive away-from-home win – and four wins on the trot in all – with a hard-fought triumph over Claremont at the Constantia Sports Centre.  Remarkably, the win represented not only Cape Town’s 200th across all three formats since the start of the 1997/98 season, but also their first victory in Constantia since October 2002, and allowed them to leapfrog their hosts to claim fourth spot on the 2019/20 Premier League points table – with at least one match in hand over all of the three teams above them.

The visitors had elected to send Claremont in to bat upon winning the toss, but that decision seemed questionable for the first 45 minutes or so, as home team skipper Mark Hendricks got stuck into the bowling from the outset.  Scoring at a personal rate of a-run-a-ball throughout, he blazed five fours in the first ten overs to see his side healthily positioned at 43-0 at the end of the initial ten-over Powerplay.

However, the introduction at this point of 19-year-old paceman Thando Ntini, who had earned a call-up to the Cape Cobras franchise since his first two brief T20 appearances for the First XI at the start of the season, quickly transformed matters.  In his opening over he dismissed both Claremont opening batsmen, and soon added a third scalp as well as Cape Town rapidly assumed dominance.  That was only further underlined by another double-strike, this time from visiting skipper Geoff Dods, and reduced to 76-5 after 26 overs as a result, the home side were left teetering on the edge of disaster.

For a while, their Kent professional Darren Stevens kept the wolves at bay though, shoring up the middle order in overseeing two consecutive middling partnerships during his 20-over stay at the crease.  Having worked his way to 35 from 51 balls, however, he then carved off-spinner Matthew Olsen to backward point, to give the latter his second scalp of the innings and a remarkable 300th catch taken off his bowling.  Thereafter there was not much remaining in the Claremont batting line-up – although a few late blows by wicket-keeper Keenan Bowers in his undefeated 32 managed to edge the home team’s total beyond the 150-run mark, before being bowled out as Ntini returned to complete a four-for on Limited Overs debut for the side.

Needing barely three runs an over at the outset, Cape Town’s reply began at rather modest pace against some accurate bowling, and with Stevens continuing to contribute by taking the first wicket as well, the visitors were consequently left in danger of losing their way at 15-1 after seven overs.  However, the back-up bowling could not sustain the pressure, allowing William Hantam to cut loose in explosive fashion – smashing four sixes and two fours over the course of three overs.  Once again, therefore, Cape Town had the initiative back and well in hand.

Still, matters rarely run perfectly smoothly for the Plumstead-based outfit, and the fall of Hantam as the first of two wickets immediately after the first drinks break pressed the reset button to a degree.  However, Cape Town’s own Kent professional, Adam Rouse, then found a solid partner in Clinton Botha, and the pair set about regaining control by adding 48 together.  With just 40 more wanted from 17 overs, with seven wickets in hand, the visitors were consequently in cruise mode as a result.  Having struck a fluent 27 from 39 balls, however, Rouse then chipped to cover as Stevens engineered a breakthrough – and within ten minutes Cape Town had lost three for one in nine balls to throw open the doors of opportunity yet again.

With a bonus point-win thus effectively removed from the table, Botha sensibly dug in and subdued his natural aggressive instincts.  Over a tight next half-hour or so, he and his captain gradually edged Cape Town closer and closer, until the danger had passed and just ten more were needed from the last five overs.  There remained one final slight twist when their stand was finally broken right at the end, but by then Botha’s undefeated 42 from two hours of diligent application (having included just a single boundary) had done the job for Cape Town, and the winning runs followed quickly. 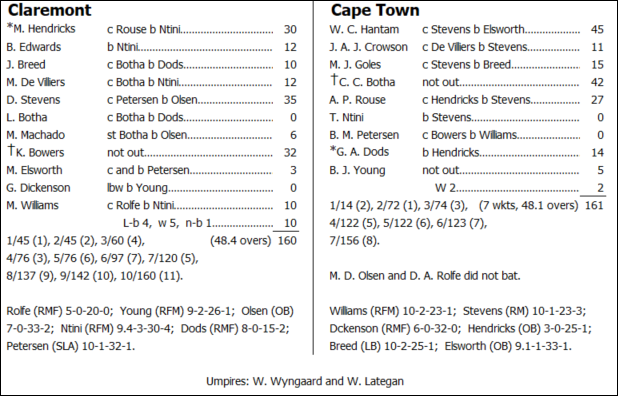