Built around a solid total that was followed by off-spinner Matthew Olsen’s 19th career five-for on the occasion of his 250th appearance for the side, the Cape Town First XI started the 2020 leg of the season in identical fashion to how they had ended the 2019 leg – with a solid, away-from-home bonus-point win.  This time it was over Bellville at the PP Smit Sports Complex – Cape Town’s third consecutive victory over their Northern Suburbs opponents, having won both of their encounters last season too.  The result lifted the Plumstead-based outfit (briefly) to fourth on the Premier League log – before Claremont reclaimed the position with a win of their own in a rescheduled match the next day.

While the visitors had held the initiative for large portions of the game, the contest certainly did have its arm-wrestling moments at well.  A 98-run stand for the third wicket between Schaughn van Greunen and his captain Uwe Birkenstock – a 23-season Bellville record against Cape Town for that wicket – had left the home side decently placed to push for victory at the second drinks break, needing a further 88 runs from their final 15 overs, with eight wickets in hand and two well-set batsmen at the crease.  That seemed even more likely when van Greunen was then immediately missed on the deep mid wicket rope off the first ball after the resumption.  However, the Olsen/James Crowson combination – which had already accounted for both wickets down – could not be denied on the day.  In that same over, van Greunen’s lofted drive to wide long off found Crowson’s safe hands to provide his third catch, thereby finally breaking the stand that was threatening to take Bellville to victory.  It was not without controversy though, as some believed that Crowson had trod on the boundary rope while completing the catch.  Still, Cape Town now had the vital breakthrough, ending van Greunen’s hard-working knock of 58 from 79 balls that had included just one six and two fours.

With the game’s destiny consequently now up for grabs, it was the visitors who seized the opportunity.  Their leading wicket-taker of the season, opening bowler Brendan Young, quickly landed two further blows through a wicket in each of his next two overs – and in between also delivered the effective coup de grâce with his direct hit run out of Birkenstock, Bellville’s last remaining hope of getting the required runs.  It was a sad end to Birkenstock’s determined knock of 45 from 70 balls, but ultimately in less than 15 minutes, Bellville had lost four for seven in 16 balls – and the game had inescapably swung Cape Town’s way.  Olsen then cleaned up the tail to complete only the second Limited Overs five-for of his lengthy First XI career – again involving the help of Crowson, whose four catches in the field was only the fourth such feat by a Cape Town First XI fielder (and the ninth overall) in the side’s last 408 matches, going back to 1997.

A little earlier, the home side had also signalled a strong intent to overhaul their stiff target, as openers Gerhard Janse van Vuuren and Aaron Smit gave Bellville an ideal launching platform.  With the pitch continuing to support the batsmen, five confidently-driven fours in the first five overs had boosted the home side to 31-0, and set them up nicely to push on strongly from there.  Continuing largely untroubled, the pair shared another three boundaries between them from there, raising the fifty partnership in the final over of the initial ten-over Powerplay.  Two of those boundaries were off Olsen, but he had the last laugh when van Vuuren’s reverse-sweep found Crowson at backward point – prematurely ending a promising 30-ball knock.  Not done yet, in his next over Olsen then accounted for Smit too, this time off a conventional sweep hit tamely to Crowson once again.  Thus the home side were consequently obliged to begin building again, with two new batsmen at the crease.  In van Greunen and Birkenstock they had just two such players for the task though, and it would be another 23 overs before the visitors could finally force themselves back into the match.

Cape Town had won the toss at the start of play, and made excellent use of the subsequent chance to bat first.  Well supported by Crowson, William Hantam led the way as the visitors maintained a consistent scoring rate of five to the over for the first half-hour of proceedings.  That was largely due to Bellville’s inability to find another bowler who could compliment their provincial opening bowler Justin Dill’s tight initial spell, a failure that saw the rest of the attack leaking runs freely.  The fifty-run stand was thus raised in the eleventh over, after which Hantam reached his third fifty-plus score of the season amidst a flurry of boundaries, having struck eight fours and a six from 56 balls to reach the milestone.  Cape Town’s first hundred partnership for the first wicket against Bellville in 23 seasons then followed by over 19.

Just when a really impressive total seemed on the cards though, Crowson holed out to a good catch on the deep square leg rope (thereby for the sixth time in seven innings passing 20 without escaping the 30s, in an impressive yet frustrating run of thwarted consistency).  Worse, Hantam followed in similar fashion in the very next over, having struck eleven fours and a six in his 76-ball innings.  That knock took Hantam’s tally to 361 runs in nine innings against his former team mates on their home ground, since switching his allegiance to Cape Town in 2015 – a tally that now includes a century, two fifties and four scores in the 20s in another impressive run of consistency.

Those two quick blows robbed the visitors’ innings of its momentum though, and the run rate dipped noticeably as the home team’s spinners began re-establishing control.  That was finally countered to an extent by Cape Town’s Kent professional Adam Rouse, who struck an energetic 26 from 32 balls to lift the Plumstead-base outfit to 180 going into the final ten overs.  Still, two quick strikes by Janse van Vuuren’s left-arm seamers kept things pegged back to 207-6 with just four overs remaining, and with the boundaries having dried up (there were just three fours in the last ten overs), it required some hard work from their leading run-scorer Mathew Goles (himself enjoying a purple patch that has produced 346 runs in his last seven innings) to nudge them to a decent final total.  Managing just a single off each of his last five balls faced, Goles consequently fell just short of a personal seventh fifty-plus score for the season, but ultimately his side had done more than enough for their sixth win of the 2019/20 Limited Overs campaign. 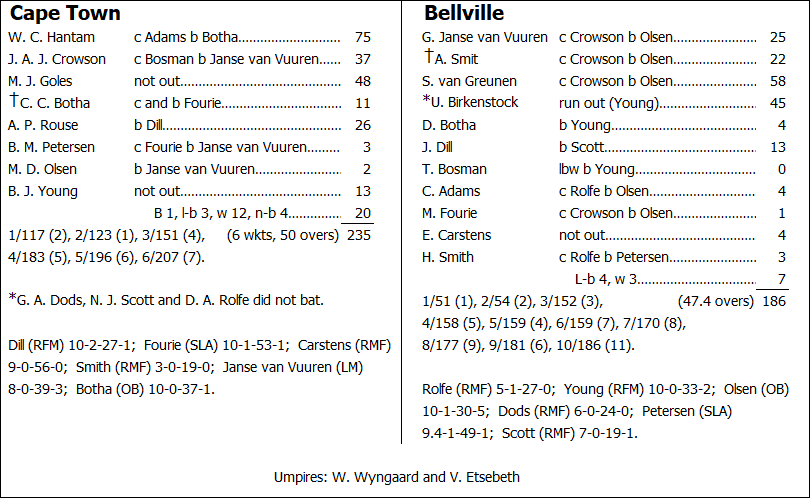