The Cape Town First XI wrapped up the 2019 leg of the season with a crushingly one-sided win over neighbours Victoria at the Chukker Road Sports Complex, thereby moving into the top five on the Premier League points table for the first time all season.  With some circles in the home team feeling that the rain rules had done them no favours in their defeat at Cape Town two days earlier, Victoria fielded an even stronger side on this occasion – including no fewer than two Protea internationals, one Cape Cobras franchise player, one Western Province provincial player and two provincial age group representatives.  However, ultimately they were beaten in conventional fashion even more easily, as the visitors themselves were far more benefited by the return of their Kent professional Adam Rouse, who played a central role in Cape Town racking up their highest-ever total at Chukker Road – and second-highest ever against Victoria.

Unlike their first-leg encounter two days earlier, when threatening inclement weather had made fielding first the prudent approach, this time there was no chance of rain – and another toss win once more gave Cape Town the advantage by allowing them now to bat first.  Their opening pair of William Hantam and James Crowson responded by providing a solid initial foundation, Hantam on 4* having survived a chance to the keeper in just the second over.  Crowson was the more dominant partner though, striking four fours as he passed 20 for the fifth time in his last six innings.   However, none of those starts were converted beyond the 30s, and now again his dismissal at this stage introduced a wobble of sorts that brought the home side three wickets inside ten overs.

Still, the visitors were not too badly placed at 96-3 at the halfway mark of their innings, leaving the destiny of the innings up for grabs at that point.  In the event, once Rouse had survived a low but otherwise fairly straightforward chance offered to mid off when 8*, he and Cape Town’s leading run-scorer of the season to date, Mathew Goles, firmly seized that initiative in unshakeable fashion by adding 158 for the fourth wicket – a 23-season record stand for that wicket against all opposition, and the highest for any wicket against Victoria.   The runs flowed fluently against all the bowlers too, both partners initially contributing equally as the 50 partnership took just 10½ overs to complete.  Thereafter Goles began to pull ahead slightly as the run rate stepped up – the 100 partnership coming at almost a run-a-ball, and by the time the 150 partnership was raised, the pair was scoring at better than six to the over.  In between, Goles reached his fourth fifty-plus score in his last six innings, from 75 balls faced, while Rouse needed 60 balls to reach his third – and highest – career fifty for the Cape Town First XI.

With the visitors consequently charging from 191 to 253 in just five overs as the Goles-Rouse stand hit its zenith, Cape Town looked on target to reach 300 in a Limited Overs match for only the second time in the last 23 seasons (having blazed 326 against a hapless Langa side last season).  However, a superb final spell by Western Province seamer Diego du Plessis put paid to that, as he dismissed both partners in the same over: trapping Rouse in front one run after passing his highest score for the side (59 from 66 balls, with a six and four fours), and then heart-breakingly castling Goles for three short of what would’ve been his third hundred for the Cape Town First XI (97 from 102 balls, with three sixes and seven fours).  He would grab a fourth scalp in his next over too, as the one Victoria bowler to emerge with some credit, but ultimately the home side were still left with a massive target to chase down.

In the event, they never came close.  Darren Rolfe claimed a Protea scalp with the very first delivery of the innings, en route to claiming three of the Victorian top four in his first 19 balls.  Fellow new-ball bowler Brendan Young then included the second Protea (also for nought) to complete a clinical demolition job that ended the match as a contest within the first PowerPlay.  Grabbing the next three wickets in eight balls at a personal cost of just a single, he extended his lead in the 2019/20 First XI wicket-taking stakes to six scalps over his nearest rival.

Left with their batting in tatters at 43-6 as a result, the home side had no hope thereafter.  Their Cape Cobras representative, Isaac Dikgale, hit four fours in a combative 32 from 36 balls thereafter, but he too was the first of two wickets in five balls from off-spinner Matthew Olsen.  Finally, left-arm spinner Bradley Petersen then wrapped matters up with the final two wickets in consecutive overs, bundling Victoria out (with almost 30 overs still unused) for under 100 for the second time in their last two Limited Overs matches there – having also knocked over the home side for 91 in January.  Thus Cape Town completed their third-biggest victory by a margin of runs in the last 23 seasons, extending their recent dominance over Victoria to seven consecutive wins now – dating back to their thrilling come-from-behind win in the last round of Two-Day matches to be played in Western Province club cricket back in January 2018, before the format was scrapped due to the prevailing drought at the time. 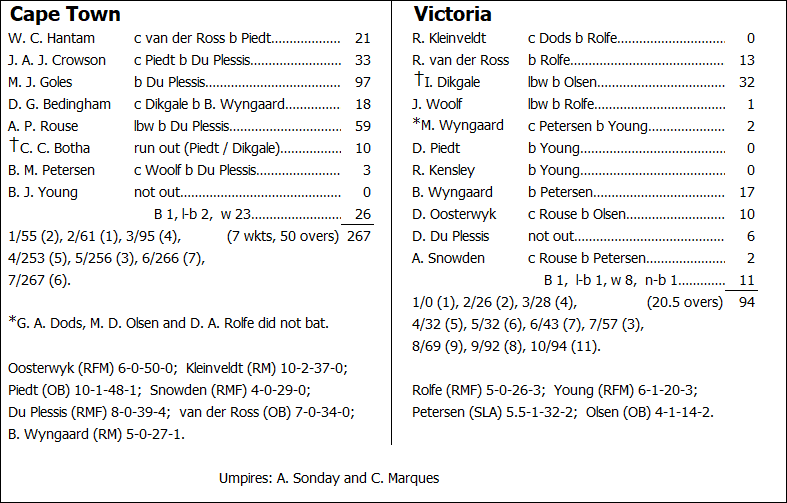