This was a match in which rain had a decisive influence, and since weather interference had always been likely, winning the toss afforded an even greater benefit – the average run rate rain rules used in Western Province club cricket do favour the side batting second (unlike the Duckworth Lewis Stern method used at higher levels, wickets in hand have no influence on calculating revised targets).  Cape Town were thus fortunate to win the toss and be able to bat second, but they also helped themselves considerably by competently restricting Victoria while in the field to ensure that they were left with a manageable target to chase.

As being asked to bat first had more to do with the home side wanting to bat second than any demons in the pitch, Victoria began well enough by progressing to 36-0 from the first twelve overs.  With Cape Town’s new-ball pair failing to make an early breakthrough for once, and the home side’s fielding effort also being below its usual standards, it was left to their skipper Geoff Dods to make the initial inroads – which included removing the well-set opening bat Reece Kensley for 30 to peg back the visitors to 57-3.

Thereafter, however, Cape Town found taking wickets a slow business as Jordan Woolf stood firm, but their spinners kept the run rate well under control at a consistent three runs per over.  Nevertheless, it didn’t take left-arm spinner Bradley Petersen long to start working his way through the visitors’ middle order once he came on, and his ten-over spell of 3-22 was instrumental in maintaining the home side’s control – the visitors consequently entered the final five overs with their run rate still firmly pegged at just three to the over.

By then, however, Cape Town’s slower-paced bowlers had all been bowled out, leaving only their quickies – who proved ineffective on the day, allowing Woolf to launch a furious assault in those closing overs.  Facing all but five deliveries in that time, he smashed 37 further runs in dominating an unbroken 65-run stand for the seventh wicket from 69 balls (a Victoria 23-season record partnership for that wicket against Cape Town).  In the process he also flew passed his fifty from 84 balls, en route to an ultimate undefeated 80 from 101 balls that included one six and seven fours.

While the visitors finished their innings on a high, their overall run rate was nevertheless still barely above 3½ to the over, which did not auger well for a successful defence in the event of overs being reduced.  Still, Victoria had the momentum, and they ran with it to claim the first Cape Town wicket in the first over of their reply.  However, a slew of no-balls and their corresponding free hits then eased the pressure, allowing James Crowson and Mathew Goles to establish a partnership that got the home side onto the front foot.

The long-expected rain finally arrived soon afterwards, and inbetween the first and second breaks the visitors’ Protea international off-spinner Dane Piedt accounted for Crowson with just his second delivery.  That apart though, the effect of the first two rain delays was negligible, having only lasted around 15 minutes each – until a third shower arrived just five deliveries after play had restarted following the previous one.  This time the rain settled in in earnest – and as the overs being lost steadily mounted, the two teams’ interests began taking increasingly divergent paths.  What they did agree on though was that each over lost only strengthened Cape Town’s chances of reaching a revised target, as with eight wickets still in hand at the time, they could easily afford to throw the bat with little danger of being bowled out.  The flip side of the coin, though, was that 20 overs are required to produce a result – and the home side was still 37 balls short of reaching that point.  It was thus Victoria’s hope that the rain would continue, so that they could at least salvage two points as a No Result from the game, while Cape Town – already ahead on run rate – needed to get back on the park to face those 37 deliveries so that they could claim the win.

Eventually the weather gods came down in favour of the home side, the rain abated and after a delay of 99 minutes, the players again took the field once more.  Cape Town now faced a revised target of 80 to win from the 22 overs that still remained – which effectively meant they needed a further 25 runs from 49 balls, with eight wickets in hand (by way of comparison, had the DLS method been in use, the home side would’ve needed 98 from those 22 overs, and might well have found those additional 18 runs rather tricky to acquire).  Be that as it may though, by adopting the sensible strategy of Goles locking down one end while his partner David Bedingham went after the runs very effectively from the other, Cape Town quickly reduced that equation to only five more runs wanted from 23 balls.  Just when the match thus seemed done and dusted though, Bedingham fell to a well-judged catch on the deep mid wicket rope while trying to finish it in style.  That was off the bowling of Piedt, which afforded him a last opening to make life difficult for the home side.  Taking full advantage, he pried out two further batsmen in the same over, leaving Cape Town suddenly five down.  It was never going to be enough with just five runs still needed though, and it was therefore perhaps a fitting ending for the home side that the winning runs came off his bowling in his next over. 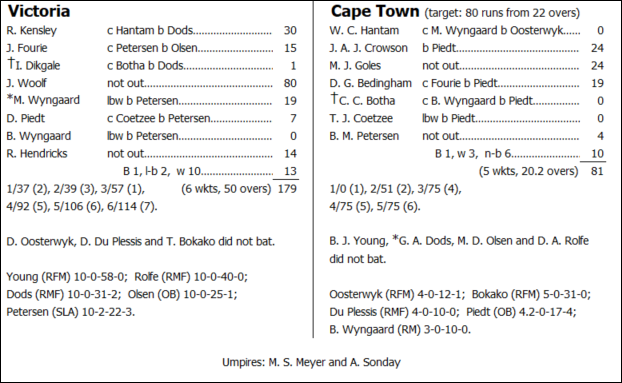