Having taken the maximum possible ten points from their preceding two games, and then discovering that they were facing an understrength Rondebosch side missing a few key players, Cape Town would’ve been excused for feeling confident as they squared up against the Premier League log leaders at the newly-incorporated Terry Eksteen Oval in Rondebosch.  In the end though, the visitors received a sound drubbing on the back of another disastrous batting failure (the third time in six weeks that Cape Town had been rolled for a sub-hundred total), knocking them back out of the top half of the points table due to the resulting heavy net run rate hit involved.

Asked to bat first, there was little initial indication of the drama to come when three wides and a six were all included in the opening over.  However, opening bowler Wesley Bedja quickly recalibrated his radar to claim the first wicket with the opening delivery of his next over, and then added a second scalp two overs later.  Nevertheless, the real fireworks were all at the other end, where the home team’s Irish import David O’Halloron produced an impeccably accurate spell of line and length that simply blew the Cape Town batting away.  Bowling his ten-over quota on the trot, he fired yorker after yorker in at the batsmen’s pads to concede just two twos and five singles – but even worse, also claimed four wickets to leave the visitors’ batting devastated at 34-6 just 75 minutes into the game.  O’Halloron’s final analysis of 10-4-9-4 was consequently the second-lowest number of runs conceded in a full ten-over spell in any of Cape Town’s 129 contested matches in the Limited Overs format since the start of the 1997/98 season, with just Nathan Palmer’s spell of 10-5-8-1 against Rygersdal (one of the clubs that later merged to form the current Rondebosch Cricket Club) in January 2005 being marginally better.

There was little hope left for the visitors’ fortunes after that, but his replacement Lyall Rogers squashed even what little remained with two more wickets in his first nine deliveries.  A third scalp was not long in following either, leaving Cape Town at 55-9 and not yet two hours into their innings.  Some brief late hitting by Brendan Young added 16 for the last wicket – the highest stand of the innings – but ultimately the home side was left with an asking rate of less than 1½ runs an over to win.

Cape Town thus needed to strike early and often just to stand even a theoretical chance of staying in the match, but Rondebosch’s openers Brad Barnes and Tayo Walbrugh instead clattered 27 off the first four overs to confirm the inevitable thrashing to follow.  Barnes showed a particularly aggressive intent to finish things quickly, striking six fours in racing to 31 from just 23 balls.  Although he was the first of two wickets to fall in fairly quick succession, Walbrugh stayed to the end, driving two late fours to complete the match less than 3¼ hours after it had begun. 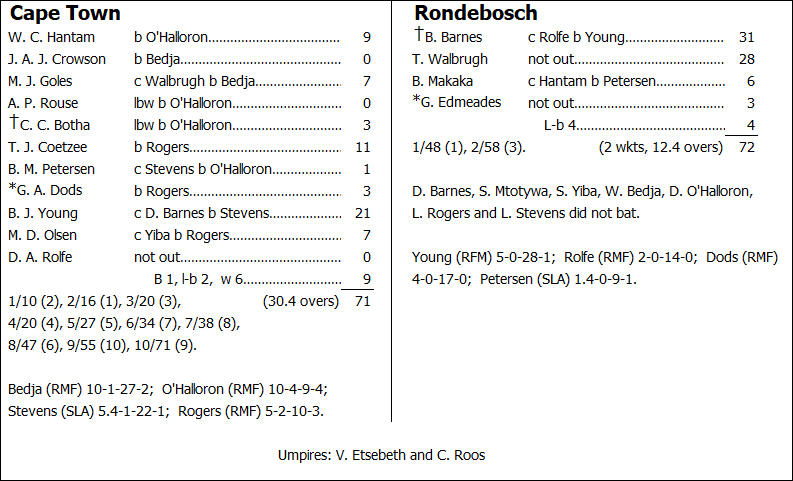