Maintaining the momentum begun the week before, Cape Town swept to a surprisingly easy win at the Boon Wallace Oval over title challengers Brackenfell.  The result moved the home side into the top half of the Premier League points table for the first time this season, while denying their opponents the opportunity to take over the lead – the prospect arising when leaders Rondebosch simultaneously also suffered their first defeat of the Limited Overs season.  For the home side, though, it was just about a perfect all-round performance, first converting a solid top-three batting performance into a formidable total – and then comprehensively destroying the visitors’ batting line-up with five wickets in the first eight overs of their reply.

Electing to bat first, Cape Town began with a blaze of early boundaries that set the pace, five fours and a six rocketing them to 33-0 from the first four overs of the game.  James Crowson in particular enjoyed himself, charging to 38 from 30 balls as the home side ended the initial ten-over PowerPlay handsomely placed on 62-0.

Though Crowson was deceived by a slower yorker soon thereafter, his partner William Hantam was only warming up, and with solid support from new man in Mathew Goles, the home side advanced apace.  Thus, with Hantam in the midst of a purple patch that produced seven fours and a six out of twelve scoring strokes, thereby flying past a 72-ball fifty, Cape Town were perfectly positioned on 120-1 at the halfway point of their innings to plunder a large total.

However, it didn’t quite fully materialise.  Four fairly tight overs thereafter produced enough pressure to elicit the run out that broke the second-wicket stand by accounting for Hantam (66 from 100 balls, with a six and eleven fours), and thereafter no subsequent partnership really got going.  Instead, the next 20 overs after the halfway mark produced just 66 further runs at the cost of four wickets, leaving the home side heavily reliant on Goles’s continued presence to keep them moving forward.  With a sense of inevitability, Goles duly reached fifty for the third consecutive innings, this time from 80 balls faced, but fell soon thereafter as seamers Jade Adams and Ettienne Jewell bowled effectively at the death to share three wickets between them.  Thus it was ultimately left to an energetic 20 from 15 balls from Bradley Petersen at the end – who was primarily responsible for taking 26 from Adams’s last three overs – to get Cape Town to a competitive 226 final total.

By club cricket standards that already represented a daunting target, but as events transpired Brackenfell never came remotely close.  Brendan Young opened with a maiden wicket over, claimed two more scalps in his fourth over and added yet another scalp in the over after that.  With fellow opening bowler Darren Rolfe bagging two victims of his own from the other end inbetween, the visitors collapsed to 16-5 – and the match had been won and lost less than 40 minutes into the visitors’ reply.

Not that they rolled over completely.  From the depths of despair Ryno Marais launched a desperate yet swashbuckling counter-attack, striking five fours and a six in a blistering 30 from 22 balls.  However, Rolfe ultimately won the duel with him, reducing Brackenfell to seven down by the end of the 14th over.  With little alternative, Adams continued waging the losing fight for a while longer, scoring 25 from 31 balls, but Bradley Petersen continued his consistent compilation of moderate returns to wrap up the tail, bowling Brackenfell out inside 22 overs to hand Cape Town one of their biggest wins in recent history. 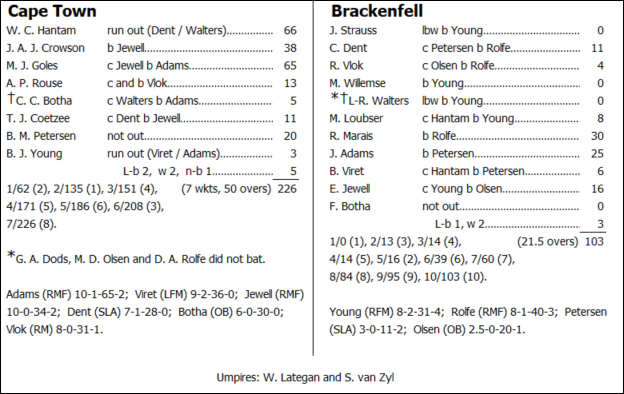