Languishing in ninth place on the Premier League log after just a single victory from their first three outings, the Cape Town First XI’s historic first-ever encounter with the newly-promoted Strandfontein provided a welcome bonus-point win that boosted the Plumstead-based outfit to a much better-looking seventh place thereafter.  Played on a rather featureless open field, and plagued by a relentlessly pumping wind throughout, the match itself never rose to any great heights.  However, it was nevertheless notable for the occasion of producing Brendan Young’s 300th career wicket for the Cape Town First XI – just the second pace bowler (after Darren Rolfe two weeks earlier) in the side to reach the milestone in at least the past 23 years.

Stuck on 299 career scalps throughout both of his previous two matches, it took Young just two deliveries to finally reach the landmark after opening the bowling, and by the end of that over he had left his hosts reeling at 2-2.  Although the going was rather slower thereafter for the visitors, they remained firmly in control – never once allowing Strandfontein to reach even three runs an over.  Still, their captain Chad Josephs dug himself in firmly, facing 40 dot balls and going boundaryless for the first 22 overs as he stubbornly occupied one end with like-minded partners at the other, which limited the visitors to claiming just one further wicket across the next 29 overs.

Eventually it took a tight run out to break the stalemate, and had a fairly straight-forward catch offered by Josephs two balls later been accepted, the end might have come quickly.  However, he survived to reach a 98-ball fifty, and then raise the team hundred in the 36th over off another dropped catch.  That was about the extent of Strandfontein’s progress though, as Nicholas Scott then took advantage of receiving his first Limited Overs First XI outing this season in the absence of regular skipper Geoff Dods, to knock over the middle order with three wickets in nine balls.  Thus once left-arm spinner Bradley Petersen finally prised out Josephs to end his 109-ball sojourn shortly thereafter, the innings unravelled rapidly as the home were bundled out with 7½ overs left unused.

Cape Town’s reply had a less than impressive start with a wicket in the first over, but needing just 116 for victory they were never under any pressure.  Indeed, James Crowson and Mathew Goles quickly broke the back of the task, hitting ten fours between them as they added 79 for the second wicket in 18 overs.  Opening bowler Saliegh Jaffar was the home side’s most effective bowler on display, persevering to bag two more scalps in his second spell as the visitors lost a steady stream of wickets trying to finish matters as the target dropped below 20 runs.  Goles remained to ensure continuity, however, and having found the rope six times up until then, he reached 50 for the fourth time this season just two balls before Young belted the winning runs with more than 20 overs to spare. 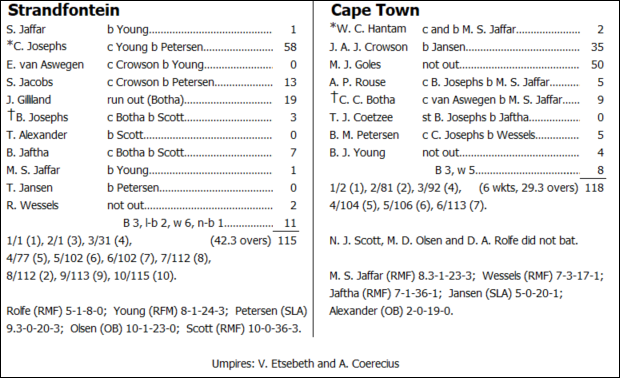