After the disappointment of the week before in missing out on participation in the national T20 Community Cup competition, the Cape Town First XI’s return to regular club cricket in the Western Province brought no immediate change to their fortunes.  Despite a fine, second First XI career hundred from Mathew Goles, a wholesale lack of substantial support from the rest of his teammates meant that the University of the Western Cape were ultimately set a target that they chased down with comparative ease in home conditions.  The net result was that Cape Town consequently lost only their second Limited Overs match in the past 23 seasons in which they included a centurion amongst their ranks.

Having been asked to bat first, the visitors encountered seemingly few initial problems as they saw off the students’ new-ball bowlers without incident.  Indeed, with James Crowson striking four fours in cruising to 30 from 37 balls, Cape Town were well-placed to kick on strongly from 39-0 after the first ten-over PowerPlay.  However, the back-up bowlers pulled things back nicely for UWC, and as that process included dismissing both opening batsmen in successive overs, the visitors’ momentum stalled badly.  Franchise seamer Jason Smith sent down his allotted ten overs on the trot, recovering from a shaky start to claim 2-10 from his final seven overs.

Matters might have been even worse for Cape Town had Goles not found his touch quickly, advancing from 4* to 37* in just 26 balls, and at 110-3 after 33 overs as a result of his efforts, the visitors were again just about hanging in the contest.  However, home team skipper Shabir Mallie broke a threatening fourth-wicket stand in the first over of his return to the attack, and with fellow provincial teammate left-arm spinner Siya Simetu also bagging a second scalp, the Cape Town innings instead stuttered along in fits and starts to reach 156-6 with just seven overs remaining.

By that point Goles had already reached a 74-ball fifty that included three sixes and three fours, and he then stepped up his scoring rate significantly in dominating a 45-run seventh-wicket stand in seven overs that allowed Cape Town to pass 200.  Though mainly restricted to taking just singles by an efficient field placing by then, Goles nevertheless demonstrated a remarkable consistency of scoring, as after reaching fifty he failed to score off just three of the 32 balls he subsequently faced before finally holing out off the penultimate delivery of the innings.  Three balls prior to that, though, he had lofted his sixth six (to go with another six fours) to reach his century from 104 balls faced – although opening bowler Mihlali Mpongwana had the last laugh after enduring a somewhat gruelling experience up until then, taking wickets with the final two balls of the Cape Town innings.

Needing just a fraction above four to the over to begin with, the students’ opening pair of Quintin Dreyer and Josh Schippers – two of just three players in the UWC side without provincial or higher experience – got their side off to a perfect start.  Maintaining the required asking rate almost from the outset, 17 in two overs off the bat of Schippers left the home side sitting pretty at 49-0 by the end of the initial ten-over PowerPlay.  That opening stand eventually reached 65 before Schippers fell, but Protea international Zubayr Hamza merely continued on from where he had left off, with Dreyer continuing to provide solid support at the other end.

A pivotal moment occurred soon after, when Hamza on 11* offered a tough catch to short cover, diving full-length but unable to hang onto the chance.  In a flash the game had taken a dramatic – and ultimately irreversible – turn.  Adding insult to injury, Dreyer then waded in to crack three fours off the next over and reach his fifty, while Hamza posted their half-century stand in the over after that – before taking full advantage of his good fortune by striking three sixes in seven balls, boosting UWC to a completely dominant 151-1 with 20 overs still in hand.

From that position of strength there was little left for Cape Town to realistically still do, although left-arm spinner Bradley Petersen tried his best once a run out had finally broken the 89-run second-wicket partnership.  Dismissing Hamza almost immediately afterwards as the first of two wickets in his penultimate over, he had a lot of help from Darren Rolfe – who held a fine over-the-shoulder effort after retreating from mid off that was worthy of being his 50th career catch for the Cape Town First XI.  That three-wicket stutter did little to halt UWC’s irrepressible march to victory, but it did at least cause a moment of pause in the two new batsmen Givon Christian and Romano Ramoo, which ultimately prevented the home side from completing a bonus-point win.  Nevertheless, their untroubled subsequent fifth-wicket stand took UWC right to the brink of victory, before a glide from Ramoo wide of third man completed the win with a full 6½ overs still in hand – Cape Town’s first defeat at the Western Cape University Oval since January 2007. 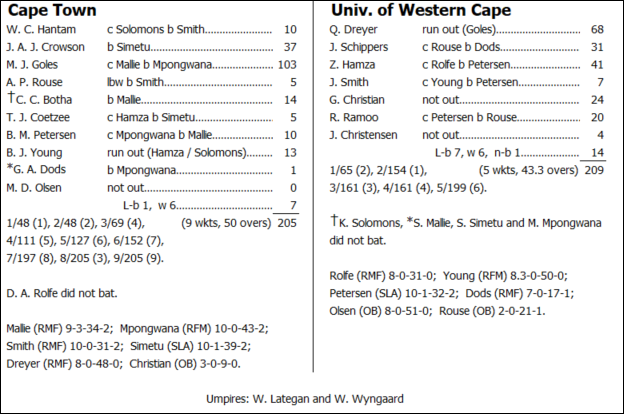