Effectively the decisive clash between the Group A heavyweights to determine who would likely finish top, this was an epic encounter that fully lived up to its billing in every respect.  In classic tradition, the fortunes of both sides fluctuated suddenly and continuously, eventually setting up a script-perfect ending: Cape Town’s first tie in certainly the last 23 seasons – and their first super over ever.  That Cape Town persevered until the end to ultimately clinch the classic battle, when not long before they were seemingly doomed to suffer almost certain defeat, speaks volumes for the never-say-die attitude of a group of players that has grown tremendously in both ability and self-belief.  In practical terms, with two round-robin matches remaining, the win left Cape Town probably just one victory short of achieving their next goal – a semi-final berth (which if reached will then present them with their next challenge: finally overcoming that obstacle too, having fallen at that exact hurdle at each of their last five attempts).

There was initially little sign of the drama to come when Cape Town finally won their first toss of the new season, and chose to bat first.  They lost an early wicket once more, but with Mathew Goles continuing where he had left off in the earlier morning match and striking three consecutive fours, matters were progressing nicely for Cape Town at 32-1 after four overs.  Indeed, with Tristan Coetzee then finding his own purple patch soon after arriving at the crease, which included four fours and a six inside three overs, matters were progressing swimmingly for Cape Town as they cruised to 76-2 by the halfway mark of their innings.

Cue the fickle fortunes of fate.  When Goles was then stumped immediately thereafter to cut short his bright 20-ball knock of 28, it became the trigger for the wheels then to fall off in spectacular fashion.  Rondebosch captain Grant Edmeades’s leg-breaks were immediately successful after bringing himself on for the next over, straight after which left-arm spinner Luke Stevens completed a full recovery from his earlier mauling to dismiss Coetzee (33 from 31 balls) en route to claiming three further wickets in his final two overs at a cost of just four singles.  With their middle-order thus blown away in barely 15 minutes, Cape Town’s momentum was stopped dead in its tracks.  There was to be no recovery from the tail either, Edmeades rounding off a tidy spell with his second wicket before opening bowler Wesly Bedja also put some earlier trauma behind him to wrap up the innings.  In a stunning collapse that cost eight wickets in nine overs while managing only 24 singles, two twos and a wide in reply, the Plumstead-based outfit had tumbled from 77-2 to 106 all out in barely half an hour, and had seemingly tossed the game away.

But Cape Town are nothing if not resilient – not to mention unpredictable – and they hit back hard with two early wickets of their own to give Rondebosch an unstable start to their chase at 8-2 after four overs.  Sensing a potential comeback in the making, Cape Town quickly claimed a third wicket too, and though Tayo Walbrugh tried to wrest back the slipping initiative for Rondebosch with a brief counterattack that brought him two sixes and a four, he too fell in a remarkable bowling spell of fluctuating fortunes from left-arm spinner Bradley Petersen.

Struck for six in his second over, Petersen responded almost immediately with a wicket in the same over.  He then bagged another victim in his third over as well, as Rondebosch quickly began foundering at 45-5.  Determined to rescue matters, Alistair Gray then slog-swept and pulled each of the first three balls of Petersen’s last over for six, and there was still time yet for both a fourth six and one further wicket before that incredible over finally ended.

Nevertheless, Rondebosch were now back on track again with 71 already on the board, such that a seemingly manageable 36 more were needed from the last seven overs.  It would probably have been exactly that, had Gray stayed the course – especially once his fourth six helped ease the Rondebosch equation still further to just 14 needed from four overs, with four wickets still in hand.  However, Brendan Young bowled his final over tightly, claiming another wicket in the process, and with fellow opening bowler Darren Rolfe being even more frugal in the over after that, the squeeze began building once more.  Still, Rondebosch remained firm favourites for the win, needing just seven from the final two overs with Gray still at the crease.

But then came some Cape Town magic: pressured by three dot balls at the start of over 19, Gray was then run out by a direct hit from near the boundary as he pushed for a second, ending what should have been a match-winning knock of 41 from 37 balls.  That setback to Rondebosch ensured that the game would go into the final over, from which Rondebosch still needed five runs for victory.  With tension running high, the level of drama only escalated even further, as the first delivery was struck straight to the fielder at mid on – who misfielded it!  The subsequent chase to retrieve the ball just short of the boundary allowed Rondebosch sufficient opportunity to run four before the ball was finally returned, thereby levelling the scores with five balls still remaining.  Surely the game was now Rondebosch’s – but no!  Looking for the winning single off the next ball, the Cape Town fielding was again under direct pressure – but this time a clean pick-up and throw was rewarded with a direct hit, bagging another run out and crucially bringing the number eleven bat on strike for the next ball.  With plenty of prior experience in such situations, bowler Rolfe fired in a full and straight delivery that shattered the stumps, and against all odds Cape Town had somehow escaped certain defeat to earn another shot at victory through the super over.

For his impressively calm and controlled bowling at the death, Rolfe received the responsibility of bowling Cape Town’s first-ever super over – and he continued exactly where he had left off, beginning with two dot balls to Gray.  Just three singles followed off the next three balls to send Cape Town’s hopes of victory soaring, only for Walbrugh to muscle the final ball to the extra cover boundary and keep the contest alive.  However, that blow was immediately cancelled out when William Hantam swept the first ball of Cape Town’s over to the boundary too – although the drama continued unabated as yet another run out then followed off the next ball.  But having brilliantly fought their way back into the contest against all odds, Cape Town were loathe to let matters slip now, and three singles off the next three balls again tied the scores with one ball remaining.  Still anything remained possible at this point, as had the super over ended with the scores still level, Rondebosch would have triumphed by virtue of having hit the most sixes.  However, in one final dramatic twist, bowler Myolisi Fumba overstepped at this crucial juncture – and just to make sure, Clinton Botha additionally deposited the delivery high over the mid wicket rope, sparking wild Cape Town celebrations and handing them top spot on the Group points table with two matches left to play. 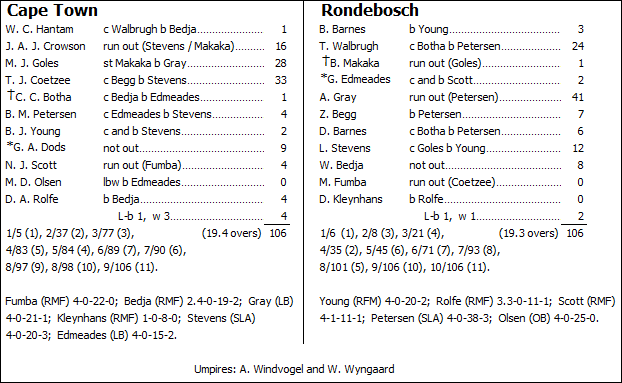