The Cape Town First XI continued building on their good start to the 2019/20 season made the day before, achieving the bonus-point win over Langa that they would’ve been targeting going into the game.  The result allowed Cape Town to tie the lead on the Group A points table with the equally-undefeated Rondebosch, setting up a tantalising clash for top spot later that day when the two log leaders would go head-to-head.

Once more Cape Town was denied the chance to bat first at the toss, although under cloudy skies initially Langa’s choice to bat first looked questionable – especially once they lost both opening batsmen in the first over of the game (albeit bowled by an off-spinner).  The seamers did not take long in making their presence felt either though, and by the time that the first hour of play drew to a close, the Langa innings had been irreparably destroyed at 39-7.

Cape Town skipper Geoff Dods had been the central figure, continuing where he left off the previous day by sending down four immaculate overs on the trot, bagging two scalps while conceding just eight singles and a wide in return.  However, off-spinner Matthew Olsen wasn’t far behind, as after setting the tone in the game’s opening over, he returned to claim a second wicket in his final over as well.  There was little that could be expected from the Langa lower-order batting from that position, and paceman Brendan Young ensured they would not prove troublesome by knocking over the last two wickets quickly, finishing with a First XI format-best return of 3-9 in barely three overs.

Cape Town’s resulting target of just 61 to win meant that the bonus-point win was achievable from an asking rate of less than four to the over, and with that rare luxury available they consequently started in very relaxed fashion – scoring just four runs from the opening three overs.  It could not last, however, and the run chase burst dramatically into life in over four with two fours, a six and a wicket (courtesy of a fine running effort by the keeper in chasing a skied swing across the line down towards deep backward square).

Thereafter James Crowson and new man in Mathew Goles elected to finish things off in style, Goles taking three boundaries off the seventh over and Crowson cracking four more of his own in the space of eleven balls faced.  As a result, Cape Town needed just two more to win at the halfway mark of their innings, which were duly achieved off the first two deliveries of the next over to leave Crowson undefeated on 25 from 28 balls, while Goles managed 20 from 18 balls.  It was as complete a performance as can be expected that early in the season, and set up things nicely for the afternoon clash for top of the table honours. 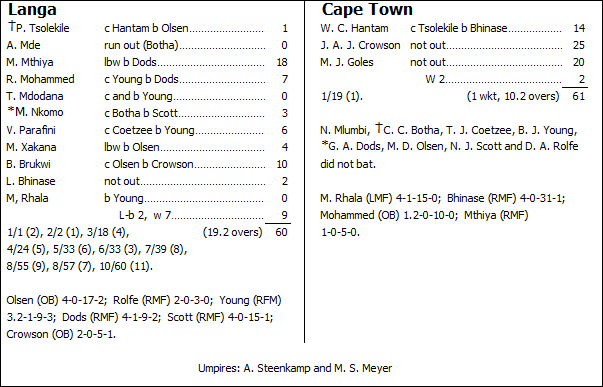