The Cape Town Cricket Club First XI kicked off their new 2019/20 season in satisfactory fashion with a fairly tight win, successfully chasing down the moderate target set by Brackenfell with a full over in hand.  Playing at the neutral venue of the University of Cape Town’s B field – for certainly the first time in at least the last 23 years, if not ever – the Plumstead-based outfit managed their chase competently – keeping up with the required rate throughout once they had overcome a rather poor start to their innings.

In a historical first-ever T20 encounter between the two clubs, Cape Town’s Northern Suburbs counterparts won the toss and elected to bat first on the same pitch that had just produced more than 350 runs in the immediately preceding morning game.  However, it was soon clear that such a run fest would not be repeated, as opening bowler Darren Rolfe in his opening over put Brackenfell under immediate pressure by castling an opposition batsman for the 100th time in his Cape Town First XI career.  Nevertheless, number three bat Helgard Coetzee whipped his second ball away for four, as the precursor to a fluent innings of 30 from 26 balls – while also dominating two consecutive 20-odd stands that helped Brackenfell partly overcome that setback.

Cape Town never let their opponents get away from them though, captain Geoff Dods striking in three of his four overs to keep chipping away at the Brackenfell batting every time that a partnership seemed to be forming.  His side’s fielding proved decisive in this regard, Cape Town holding two superlative efforts in particular on the rope.  As a result, Brackenfell never managed to build any real momentum throughout, and with only two overs remaining had reached just 93-6.  Ultimately though, a few late blows by Stefan Joubert in the closing moments helped his side to a three-figure total – which at least offered some hope of mounting a successful defence.

That hope then surged dramatically in the opening moments of Cape Town’s run chase, as Brackenfell’s two opening bowlers Brandon Viret and Joubert both struck in their first over to leave Cape Town reeling at 2-2.  However, Joffvre Duminy – making a return to the Cape Town First XI after missing their last three matches of the previous season – pounced on the back-up bowling, as he and Cape Town debutant James Crowson took 36 from the first four overs sent down by the change bowlers to put matters nicely back on track for Cape Town.

Although Crowson fell soon thereafter, Duminy continued on to produce a sparkling First XI career-best knock of 41 from 43 balls, linking up in turn with Clinton Botha to reduce the equation to a manageable 37 from seven overs with seven wickets in hand.  Brackenfell rallied somewhat with Duminy’s dismissal immediately thereafter, eventually boosting Cape Town’s task to 18 needed from the last three overs.  Jittery fielding was already undermining their own cause though, and two catches went down that, if held, may well have made Cape Town’s task considerably tougher.  Botha was the recipient of one of those lives, and he capitalised to score the winning run that guided Cape Town home with ultimately an over to spare. 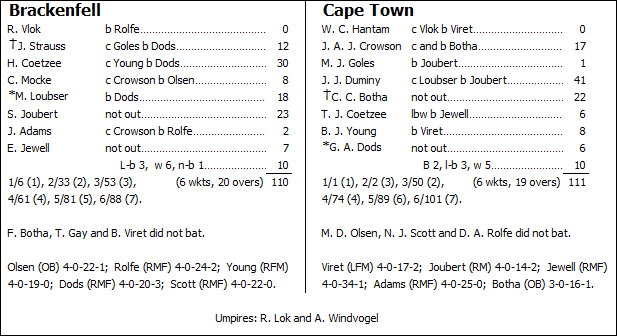