Cape Town completed a near-perfect opening day to the 2018/19 season, securing their second bonus-point victory of the day by clinically disposing of Milnerton in the afternoon game to bag the maximum ten-point haul of log points from their two games. That meant that the Plumstead-based outfit ended the day top of the Pool B points table – albeit that closest rivals Western Province CC and the University of the Western Cape both had a game in hand over them.

In only their second-ever encounter with Milnerton (following the latter’s promotion to the Premier League last season), Cape Town dominated the match from the outset, racing to 70 without loss in barely 10 overs after electing to bat first on the Western Cape University main oval. Openers William Hantam and Mathew Goles didn’t start with any great flourish, taking a moderate 14 from the first three overs, but then six fours between them over the course of the next three overs set the pair well on their way.

The fifty partnership was duly raised from the last ball of the eighth over, Goles the slightly greater contributor, but Hantam then stepped up his pace to finish with 39 from 31 balls, with a six and five fours. In the process, he also became the 15th player in the last 21 seasons to complete 2 000 career runs for the Cape Town First XI – and having needed just 72 innings to reach the milestone, was the second-fastest of them all, beaten only by Dominic Telo’s 63 innings). Hantam’s opening stand of 70 with Goles was only Cape Town’s tenth first-wicket fifty partnership in the history of the T20 format, and their best since the same pair put on 82 against Western Province CC during the opening weekend of the preceding season.

Goles continued on for a while longer, eventually holing out on the boundary two short of a fifty (49 balls, four fours) immediately after having raised the team hundred in the 16th over. However, his dismissal was part of a middle-overs fightback by Milnerton that captured four wickets in barely six overs, led admirably by left-arm spinner Zarin Hardenberg (who held his nerve despite Cape Town’s great start, claiming two for 25 from his four overs). This effort gave Milnerton the chance to set themselves a manageable target, and having conceded no boundaries in the last six overs, they duly restricted Cape Town’s finishing effort sufficiently to keep themselves in the contest.

That opportunity was quickly lost by the batting unit though. A swing across the line, a skied big hit and then a confused run out all followed each other early and in quick succession, such that barely four overs into their chase, Milnerton were already left staring down the barrel at eight for three. That was not long in becoming 19-4 either, leaving opening bat Gareth Swardt as alone among the top five in reaching double figures.

His resistance was gritty far more than threatening though, and his boundaryless 22 from 33 balls offered little in the way of loosening Cape Town’s grip on proceedings. Indeed, when Cape Town skipper Geoff Dods then snared Swardt too as the middle victim of three in the space of eight deliveries with his medium-pacers (at a personal cost of just two runs), the Milnerton innings was left shattered beyond repair at 48-7. There was to be no rescue effort from the lower order either, as off-spinner Matthew Olsen stepped up to sweep away the tail by claiming the last three in eight balls himself – bundling Milnerton out for just 74 with 4½ overs left unused, and sealing a massive 60-run victory for Cape Town. 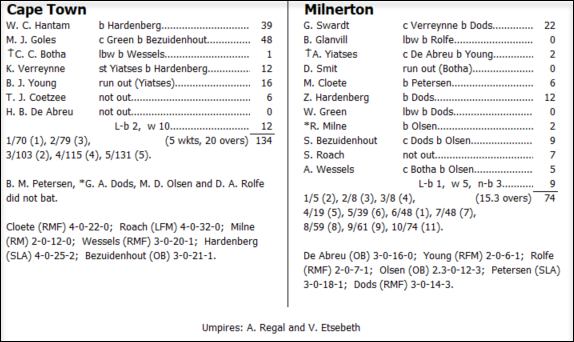