The new 2018/19 Western Province Cricket Association season provided an excellent start for the Cape Town Cricket Club First XI. In the morning game of the double-header that represented their opening day, a competent batting display, followed by a dominant performance with the ball, was sufficient to give Cape Town a bonus-point win over Ottoman at the neutral venue of the University of the Western Cape.

Having elected to bat first upon winning the toss, the Plumstead-based outfit got off to a brisk start – a full toss pulled for six in the opening over by Mathew Goles laying the groundwork for a quick sprint to 25-0 from the first three overs. Gradually Ottoman began pulling things back though, a task helped significantly by medium-pacer Nadier Samaai inducing Goles to clip straight to an infielder and end his 25-ball knock (with two sixes and two fours). Still, William Hantam took over the role of keeping Cape Town’s momentum going, and with good support at the other end, the Plumstead side were consequently well-positioned at 95-2 to make a strong push from the final five overs.

It never quite happened though, as Samaai then chipped in with another wicket instead to trigger a mini-collapse of three wickets over the course of the next 2½ overs. That included the important double-blow of losing both Hantam (36 balls, two fours) – run out after being sent back by his partner – and then that same partner being castled next ball. However, Cape Town still had enough in hand to take 15 from the next eight balls, setting them up with a final total that they could realistically hope to defend.

That much was soon very apparent too, as part-time off-spinner Hilio de Abreu promptly sneaked the first legal delivery of the Ottoman reply onto the stumps via the pad. He would gobble up a return catch in his next over as well, to put the Surrey Estate side on the back foot from the outset at 11-2. With the follow-up spinners Brad Petersen and Matthew Olsen then both striking in their opening overs as well, Ottoman were left floundering badly at 43-4 after nine overs.

Muzzamil Sheikh dug in for Ottoman to shore up one end over the next eleven overs, but he could only find the boundary rope twice in the first nine of those overs spent at the crease. That left Ottoman needing a highly unlikely 79 from the last eight overs, and though Sheikh then did manage to strike a legside six in each of the following two overs, he also got out immediately afterwards (31 balls, two sixes and two fours) to increase the pressure still further.

It proved far too stern a task for the tail to handle, and instead Olsen, Petersen and then opening bowler Darren Rolfe all struck in consecutive overs to reduce an already struggling 73-4 to a near-disastrous 83-8. There was nothing to be done from that position, and with Rolfe maintaining the pressure, the last-wicket pair merely played out the final few deliveries to hand Cape Town a comfortable 34-run win and send them into the afternoon game with a maximum five-point haul from their opening match. 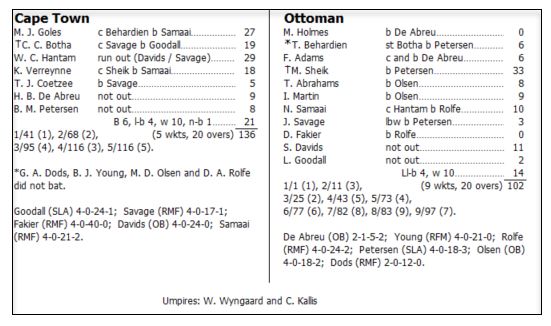